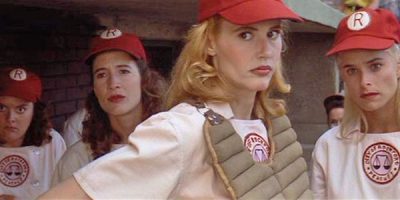 You know there’s no crying in baseball, but here are 25 things you might not know about the 1992 classic, A League of Their Own.

1. THE MOVIE INSPIRED A VERY SHORT-LIVED TV SHOW OF THE SAME NAME.

It ran for one season in 1993 and although none of the marquee names from the movie came back for the small screen edition, Megan Cavanagh and Tracy Reiner reprised their roles as Marla Hooch and “Betty Spaghetti” Horn, respectively; Garry Marshall stayed on as Walter Harvey and even Jon Lovitz came back for one episode.

2. THE REAL LIFE FOUNDER OF THE ALL AMERICAN GIRLS PROFESSIONAL BASEBALL LEAGUE (AAGPBL) MADE HIS FORTUNE SELLING GUM, NOT CHOCOLATE BARS.

In the movie, the league’s owner and founder is a candy bar mogul; the real AAGPBL was started by Philip K. Wrigley, of the chewing gum and the Cubs.

3. THE ORIGINAL FOUR-HOUR CUT OF THE MOVIE GIVES A LOT MORE BACKSTORY FOR ALL THE GIRLS.

For instance, in one cutscene, Kit (Lori Petty) and Dottie (Geena Davis) discuss how after dating for a preposterously-long five years without commitment, Dottie married Bob the night he got drafted.

4. THE MANSION THAT SERVES AS WALTER HARVEY’S HOUSE HAS A SECRET BAR HIDDEN BEHIND A TRICK WALL.

Originally, a scene was made up specifically to incorporate the bar, but it was cut.

5. A SCENE FEATURING SOME VERY RETRO FEELINGS ABOUT PREMARITAL SEX WAS CUT FROM THE FILM.

The slimmed down version of the film lets Madonna’s Mae keep her “All the Way” nickname, but a deleted scene shows Dottie advising Kit not to hang around such a bad influence. Dottie isn’t sure if going “all the way” is something married women “get to” or “have to” do.

6. THE SCENE AT THE SUDS BUCKET BAR WAS ORIGINALLY MUCH LONGER.

The lengthier version shows Kit striking out a would-be-suitor who bets he can get a hit off her in exchange for little quality time out in his truck. Oh, and Tom Hanks’ character, Jimmy Dugan, follows the girls to the bar and gives Kit some timely advice to win the wager.

7. APPROXIMATELY 2000 GIRLS CONVERGED ON UNIVERSITY OF SOUTHERN CALIFORNIA’S CAMPUS FOR THE AUDITIONS.

But none of them got to read for director Penny Marshall until they passed the baseball portion of the audition. Well, except for Geena Davis, who showed off her then-lacking baseball skills in Marshall’s backyard at their first meeting.

Garry Marshall joined the cast when someone dropped out and they needed a last-minute actor. Marshall, who passed away in 2016, was best known for his own work behind the camera; he directed Pretty Woman, Runaway Bride, and The Princess Diaries, among many other projects. 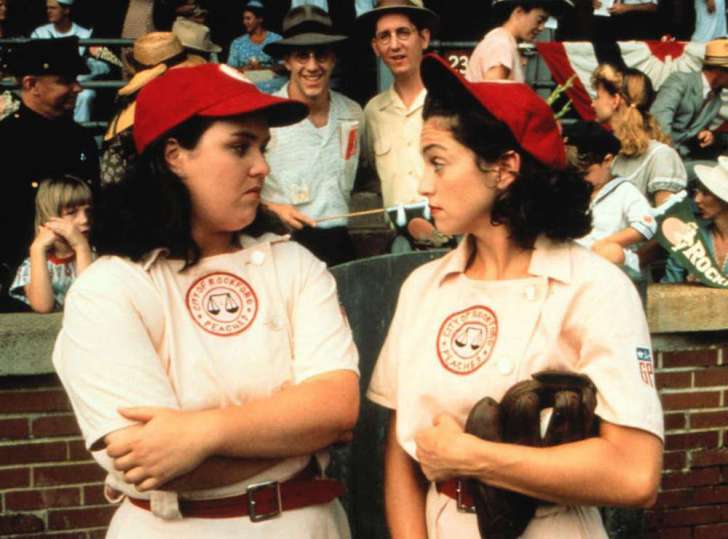 9. ROSIE O’DONNELL ORIGINALLY READ FOR THE PART OF MARLA.

When Megan Cavanagh proved to be perfect as Marla, a new part was written for O’Donnell, who was not only hilarious but one of the more talented ballplayers.

It was among the details lost when the Suds Bucket scene was shortened. But I think it really adds something to the movie. 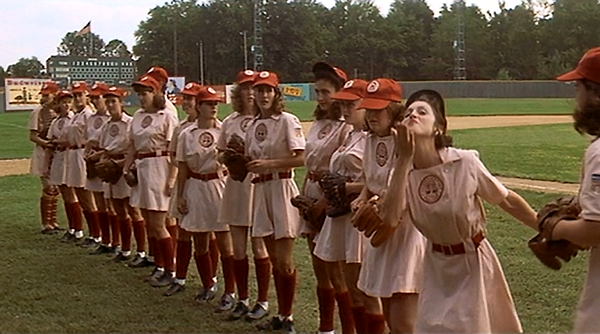 11. BEFORE FILMING EVEN BEGAN, THE ACTRESSES ALL HAD TO HONE THEIR BASEBALL SKILLS.

They spent eight hours a day, six days a week for seven and half months participating in baseball training.

12. MADONNA WORKED AT LEAST AS HARD AS EVERYONE ELSE BUT STILL STRUGGLED WITH SOME OF THE MORE TECHNICAL ASPECTS OF THE GAME.

Her character, Mae, had to be moved from third base to the outfield because she couldn’t master fielding ground balls.