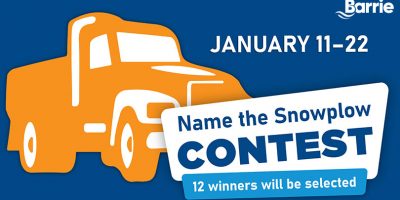 Plowy McPlowface is already one of the names suggested for one of Barrie’s snowplows and you can make a suggestion, as well!
On Twitter, Luke suggested “Barrie Maniplow” and Barrie’s Mayor, Jeff Lehman said “Okay that’s fantastic. Please submit! ”

The contest is open until January 22 and allows Barrie residents to submit suggested names for the dozen plows working city streets. A shortlist of names will be selected in late January, after which the public will vote to choose twelve names.

You can also track the snow plows around Barrie, HERE.