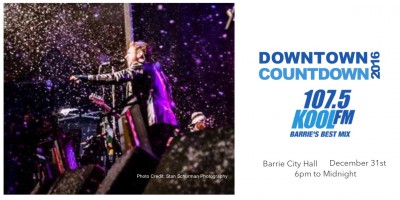 The City of Barrie is proud to present the 18th annual Downtown Countdown in partnership withRock 95 and 107.5 Kool FM. Traveling from near and far, thousands will join together in downtown Barrie to ring in the New Year with a free evening of fun and entertainment for the whole family!

The celebration began in 1998, which very quickly became a tradition for the community and grew to be one of the largest New Year’s Eve events in Central Ontario. Join us in downtown Barrie for an exciting celebration. We look forward to ringing in 2016 with you!

The Sheepdogs
The City of Barrie is excited to welcome The Sheepdogs, one of Canada’s biggest current rock acts, to headline the Downtown Countdown. The band has just released their 5th album, ‘Future Nostalgia’, with lead single ‘Downtown‘ hitting the Top 5 on Canadian rock radio for 10 weeks.  Their latest single ‘I’m Gonna Be Myself’ has already climbed into the Top 10. They are four-time JUNO Award winners and have achieved success in both Canada and the US with previous hits, including ‘I Don’t Know’, ‘Feeling Good’, and ‘The Way It Is’.  They are sure to deliver an amazing live show with their take on classic guitar rock, what they call “pure, simple, good-time music”.

Judy & David
Known as “Canada’s Sing-Along Superstars,” Judy & David are the Juno award-winning stars of TV and stage and are now among the most successful children’s entertainers in North America.  Since 1993, their music has been acclaimed for its ability to engage a young audience’s active involvement at every turn.  They have recorded 18 albums, sold over 5 million recordings, starred in TV shows such as ‘Judy & David’s Boom Box’ on Treehouse TV and ‘JiggaJump’ on Kid’s CBC, and have performed live shows all over the world.  This New Year’s Eve, they’ll be in Barrie to ring in the 2016 with a special show for you and your family starting at 7pm, which will be followed by fireworks at 7:45pm.

Meet and Greet! Following the family show, head inside the City Hall Rotunda where you will have the opportunity to meet Judy & David!  The meet and greet will start at approximately 8:00pm.

Sun K
Sun K converged along Langsdowne Avenue in Toronto, combining their experiences from along the way to produce a unique brand of grassroots folk rock splintered with blues sensibilities. Their live show moves seamlessly between up-tempo backbeat-driven rock ‘n roll and creeping country-infused ballads, projecting a sound that seems originated years before the band members were born. Their sound is inspired by the ongoing interaction between Sun K and the characters in the narrative they tell, framed by the city they live in, and nourished by the audiences they play for.

Dead Mechanics
The Dead Mechanics are a group of friends that were brought together through their love of music and their passion for live performance.  The group formed in Barrie during the summer of 2008 and have since released 3 EPs with their most recent being ‘Victims of Influence’.  The EP highlights the bands constantly evolving sound. Members include Justin Leduc, Trevor Stanford, James McLean, and Jesse Muldoon. The Dead Mechanics set themselves apart with original songs and a stellar live performance.

The City of Barrie invited local acts to apply for the opportunity to perform on the Downtown Countdown stage.  The Dead Mechanics were selected from over 30 submissions to play in front of a hometown crowd, and they will put on a performance not to be missed.

On New Year’s Eve, Barrie Transit service is free from 5pm–3am to help you get to and from your celebrations safely.

When making your way around downtown, road closures for the event will include:

Downtown Countdown 2016 is Generously Supported By