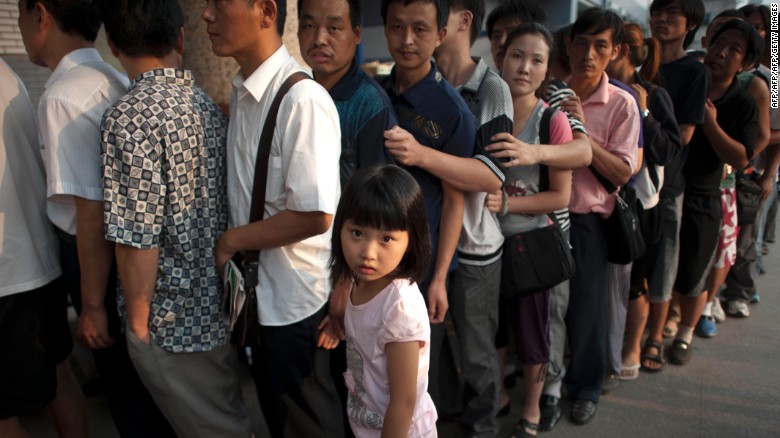 This picture taken in August 2011 shows a girl standing beside her father as hundreds of Chinese parents queue up to see a doctor outside a children’s hospital in Beijing.

Beijing (CNN)Beijing police have arrested 12 people for scalping tickets for hospital appointments as authorities pledge to crack down on a scam that infuriates many and prevents some patients from getting much-needed care.

The arrests, confirmed by police Thursday, followed a viral video of a furious young Chinese woman who failed to get a hospital ticket for her paralyzed mother after lining up at a Beijing hospital for a day.

The woman had traveled hundreds of miles and rented a basement room near the Beijing hospital for $20 a day, according to the Beijing Youth Daily. She had to carry her mother on her back to visit the hospital.

Most hospitals in China require patients to buy registration tickets in order to see a doctor or get hospital treatment but the system, known as “guahao” in Chinese, is widely abused.

Scalpers buy up tickets in bulk and then sell them to would-be patients at inflated prices. Those with the most serious needs are often the biggest victims of the rip-off.

The unidentified woman in the widely shared video said scalpers wanted 4,500 yuan ($685) for a ticket worth 300 yuan ($45) had she been able to register herself.

Since the video was published online Monday, thousands said they shared the woman’s frustrations and showed their support by posting their own personal anecdotes.

Desperate, exhausted and seething with fury, the young woman from northeast China made an epic three-minute rant against the scalpers that was captured by an onlooker’s smartphone.

“You guys are outrageous!”

The woman has since taken her mother back home. She has received threatening calls from scalpers, the Beijing Youth Daily reported.

Many Chinese believe the best medical treatment is available in big cities and travel huge distances in an attempt to get hospital appointments.