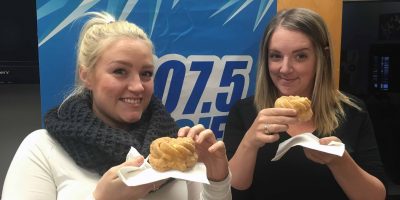 Suffice to say, this announcement was met with great response in-stores and online. Being a HUGE fan of the Disneyland Churro myself, I decided that I would give the Churro Doughnut a test. All in the name of science and informing our listeners. I don’t want you waiting in line for a terrible doughnut! Victoria, our equally selfless promotions assistant, was willing to join me. So, off we went to the nearest Tims, to pick up a couple of Churro’s and begin our extremely important and scientific experiment.

Our first impression was that the doughnuts looked like a Cruller covered in cinnamon and sugar. Actually, that’s pretty much exactly what they are but also they’re FILLED WITH CARAMEL. After fending off advances from co-workers who wanted to try a bite (back off, don`t taint the sanctity of our experiment) it was time for the first taste. 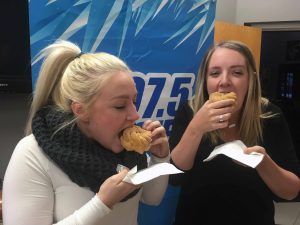 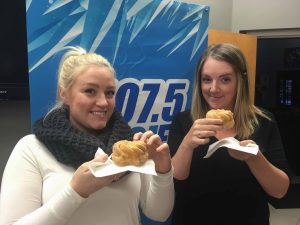 It was everything we had hoped for – light, fluffy and oh so sweet. After a few more bites, we reached the caramel filling and that elevated this doughnut experience to the next. level. If we had one complaint, it would be that the caramel is mostly concentrated in one area, so you get maybe 2-3 delightful caramel-filled bites. The bites without the caramel are still good, but let’s be serious, without the caramel it’s really just a cruller covered in cinnamon and sugar.

Because of the un-even caramel distribution, we give this doughnut a 8/10. That being said – it was still amazing and we really hope Tim Hortons fixes the caramel issue AND keeps the doughnuts on their permanent menu. On second thought, maybe better for our waistlines if they don’t.