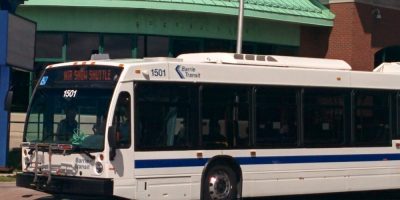 When Georgian College students start going to class, they’ll have a new bus route or two to get them there.

Barrie City Hall has rolled out a new express route, called Route 100, that will go to the college, downtown and Georgian Mall, taking some pressure off other bus routes.

“I think it’s great that they’re giving us the opportunity” says Georgian College Student Union President Jonah Brandridge, “realizing that students are an important part of Barrie, especially in the north end of Barrie.”

Brandridge touted the working relationship between the Student Union and City Hall in creating these extra routes. An advisory committee had been struck, Brandridge sits on it, along with a few members of Georgian College and City Hall, meeting regularly to discuss transit issues among others.

“It’s adaptable, it’s flexible” says Brandridge “as things come up, and new changes are needed, we’ll be able to implement those changes.”