Earlier this year Hedley was pulled from this year’s Juno Awards Ceremony over allegations of sexual misconduct. Numerous people on social media have accused members of the band of committing serious acts, preying on girls as young as 14-years-old. Band members have taken to social media acknowledging the life of a touring band is an unconventional one, but there was always a line they would never cross.

The band issued a statement, All of us in Hedley respect and applaud the #MeToo movement and the open and honest discussion it has inspired. We believe these conversations are particularly important within the music industry, which does not exactly have an enviable history of treating women with the respect they deserve. We appreciate the bravery of those who have come forward with their own stories, and we realize that all of us, as individuals and as a society, can and must do better when it comes to this issue. However, if we are to have a meaningful, open and honest discussion, we all have to accept and respect that there are at least two sides to every story. The recent allegations against us posted on social media are simply unsubstantiated and have not been validated. We would hope that people will bear-in-mind the context in which these unsupported accusations have been made before passing judgement on us as individuals or as a band. We realize the life of a touring band is an unconventional one.

While we are all now either married or have entered into committed, long-term relationships, there was a time, in the past, when we engaged in a lifestyle that incorporated certain rock and roll cliches. However, there was always a line that we would never cross.We realize this conversation is as important to our fans as it is to us, and we never want to distract from these important discussions. To that end, as we move forward, we will be evaluating some of our next steps. Hedley’s music should only ever be a positive force, and our performances and personal appearances should continue to be inclusive and safe experiences that bring nothing but joy and happiness to our fans.”

Hoggard is scheduled to appear in court next week. Police are concerned there may be other victims and have asked that anyone with information contact them at www.222tips.com or Facebook Leave a Tip . 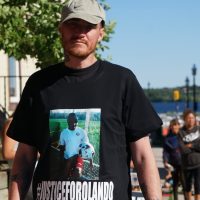