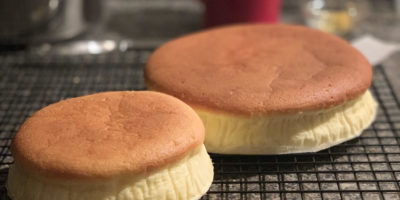 Soufflé Cheesecake is often called, in North America, Japanese Cheesecake. It’s light and airy with a good cheese flavour and not too sweet. It’s rather addictive. Until last night, the only cheesecake of this type I’d ever had was from Uncle Tetsu’s. Once only available in Toronto, Uncle Tetsu’s is now at Market & Co. in the Upper Canada Mall in Newmarket.

This week, I decided I really wanted some Japanese Cheesecake, but without the hour-long round trip, so I found a recipe and gave it a shot!

Here is the recipe I used from Just One Cookbook.

And here are my results! 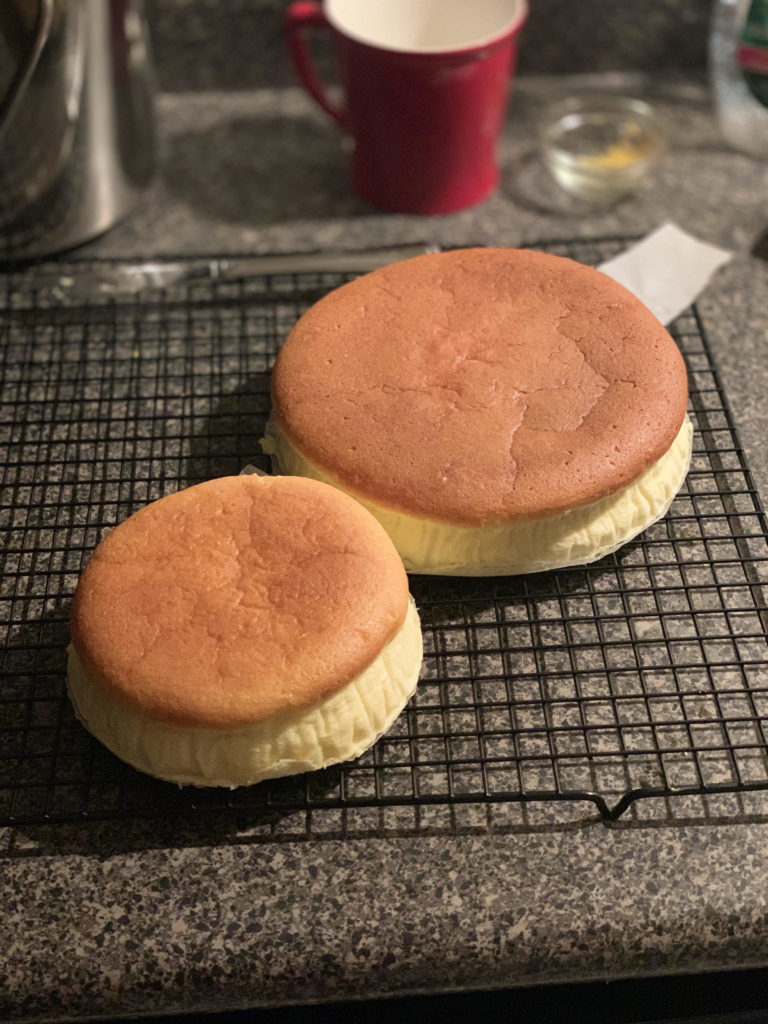 I didn’t have a 9-in round pan with 4-in tall sides so I used an 8-in pan and a 6-in pan and used parchment to make it taller (as described in the recipe). The sides don’t look as nice as the cakes in the recipe or Uncle Tetsu’s but the taste is wonderful!

Other than that, I followed the instructions, only taking the smaller cake out of the oven first and cutting the baking time just a little for the 8-in cake as well. I checked for doneness by touching the top of the cakes after about 60 minutes in the oven. The 6-in cake was done by that time as the top sprang back after gentle touch.

What’s the trickiest part of this recipe? There’s nothing too tricky (ie. no special temperatures for the batter like custard, no chance for eggs to overcook like a creme brule or creme caramel). Make sure the cream cheese is really smooth, don’t skip the step to pour the batter through a sieve and watch your egg whites closely so you don’t make them too stiff (check every 10 seconds once the sugar is whisked in).

The hardest part is waiting for the cake to cool properly in the fridge for 3 hours! But, trust the process- it’s so lovely once it has properly cooled!

If you make the recipe, share your pictures and thoughts!