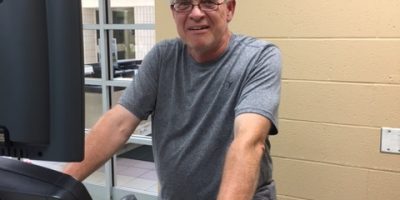 So, if 60 is the new 40, guess how old I am today? I began a journey nine months ago, with the help of Joel Seymour at the Barrie YMCA, to lead a healthier life…and it’s made a difference…

The key to all of this is not losing interest through repeating the same routine over and over again. Joel has been great in that regard, always coming up with something new or a variation of something old – usually with a big, evil grin on his face when he introduces it.

The journey continues, by the way. (I’ll be feeling 30 again before you know it!) If 60 is the new 40…I’m getting closer. Five months into the Healthy Hearts program offered by the Barrie YMCA and RVH and I’m feeling stronger and my endurance is better. I went through my third assessment this week. I managed 27 push ups in 30 seconds (barely squeezed out nine the first time around), squats in 30 seconds went from 16 to 24, and I doubled my planking time to just under 60 seconds. I’m happy. So is my mentor Joel Seymour…

Still, there was a 30-second setback in my time on the bike test, which ticked me off, but not Seymour…

Yea, still not happy about it. On the upside, after five months Seymour thinks I might be able to handle a Warrior Dash or Tough Mudder competition…thinks I should train for one this winter.

I guess things are going well.

Here’s the full rundown from this week’s assessment:

Right then, it’s been a month  since I started the Healthy Hearts program at the Barrie YMCA. I’m feeling good about my progress. I won’t lie, it’s taken some effort, but I’m no longer winded at the top of the stairs, I feel more energized and I notice a difference in my arms, legs and chest. And now, I’ve graduated to the ‘Power Room’ — the heavy equipment.

The Y’s Joel Seymour is keeping track of my progress…

Somebody said that it couldn’t be done
But he with a chuckle replied
That “maybe it couldn’t,” but he would be one
Who wouldn’t say so till he’d tried.

So I’m trying. Trying to lose some weight. Trying to gain some strength as I nudge closer to age 60.

Somebody scoffed: “Oh, you’ll never do that;
At least no one ever has done it;”
But he took off his coat and he took off his hat
And the first thing we knew he’d begun it.

To prove it, I’ve enrolled in the Healthy Hearts program, hoping I won’t be winded at the top of the stairs, can lose some of my middle-age spread and can start pulling up – when I race my grandkids to the back of the yard because I want to, not because I have to. Check back for updates on my progress every week or two. If I can do it…you probably can, too!

Listen below for more on the Healthy Hearts program:

Need to know more about the Y in general? We sat down with Barrie YMCA General Manager, Dale Rowe