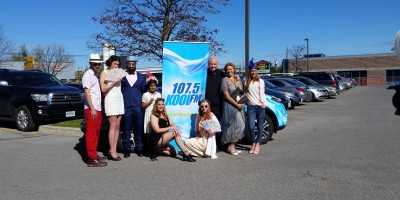 The OK Friday Barnfair is today at Burls Creek Event Grounds in Oro. A family friendly, relaxed, cultural environment to shop and socialize. It’s on from 3-8 tonight.

The East Coast Canada Cup arrives at Blue Mountain today. The only Canada Cup downhill race in Ontario featuring an action packed weekend with a $6,000 prize purse up for grabs. While all of that is happening Pedal Fest will kick off tomorrow featuring bike demos, bike shows and all kinds of two-wheeled fun.

For the first time ever Sunset Speedway is hosting Formula Drift Canada. It’ll be a smoke show above the track and cars will be on track practising starting at 5 today.

Volley for Johnny is a fundraiser supporting Parkinsons. Everyone is welcome to play at the Centennial Beach Volleyball location beside the Tiffin Boat Lunch. Our Kool Days of Summer Street Team on location.

The Strawberry Festival will be a popular destination at Barrie Hill Farms today and tomorrow. With balloons, kids face painting, wagon rides and live music.

Dyeing to Spin runs until 4p this afternoon at the Simcoe County Museum with hands on displays and demonstrations with the Huronia Spinners Guild.

If you’re boating on Lake Simcoe you may notice some red and green decorations, its Christmas in June at the Port of Orillia this weekend.

The first ever Penetanguishene Air Guitar Championships will happen tonight at the Maple Valley Sports Club. The air guitar champion crowned tonight will advance to the National Finals in Toronto next month and potentially go as far as the World Championship event in Finland. Doors open at 8p.

The 2nd Annual Port McNicoll Festival is happening on Talbot Street until 4p.

The only Canada Cup downhill race in Ontario is on this weekend at Blue Mountain. The East Coast Canada Cup with all qualifying runs happening today and the feature Canada Cup race will go tomorrow! While that’s going on Pedal Fest is happening in the Village with an extreme bike stunt show, bike demos and a bike parade going at 2 this afternoon.

The Toronto Outboard Racing Club will be making noise on Gull Lake in Gravenhurst as part of the Muskoka Powerboat Races from sea fleas to hydro planes and classics.
Watch the smoke show at Sunset Speedway today as they host Ontario’s first Formula Drift Canada Series Race and it starts at 4p with opening qualifying rounds.

The 12th Annual Kids Fishing Day is a perfect start to a Sunday at Heritage Park on Barrie’s Waterfront presented by the Kempenfelt Rotary Club. Free for kids 13 and under, with games and family fun until 1pm at Heritage Park.

The Gatsby Garden Benefit is on this afternoon. It’s the 1st Annual Gala for the Women and Children’s Shelter of Barrie (hosted by Dale & Charlie from Kool Mornings,) I’ll be the LIVE Auctioneer, live music, kids activities and more from Tangle Creek Golf and Country Club from 1-5.

The Toronto Outboard Racing Club continues to make noise on Gull Lake in Gravenhurst as part of the Muskoka Powerboat Races from sea fleas to hydro planes and classics.