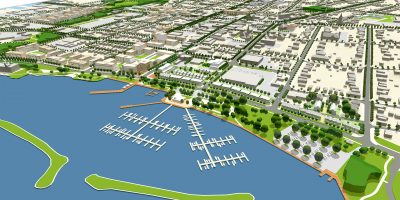 Orillia City Council has approved an implementation plan for the next phase of waterfront development on Front Street North.

This allows staff to ask for proposals from private developers for a mix of residential and retail uses between Mississauga Street East and Centennial Drive.

“The Economic Development Department is receiving significant interest in this property because of its strategic location between the downtown and waterfront,” said Laura Thompson, Manager of Real Estate and Commercial Development. “We anticipate that the development of these lands will be a catalyst for development on surrounding lands in the waterfront area.”

The waterfront development concept for 70 Front St. N. and surrounding municipally-owned lands contemplates an increase in the number of people living and working in the downtown core and includes a mix of residential and commercial uses between Front Street, Mississauga Street East and Centennial Drive.

Orillia Council has thrown its weight behind a proposed concept for the town’s waterfront. A special meeting at City Hall today saw council support, in principle, a development scenario for 70 Front Street. It would intensify the number of people living and working in the downtown and would contain residential and commercial elements. “This Council is committed to connecting our downtown to our waterfront by implementing the vision of the Downtown Tomorrow Plan,” said Mayor Steve Clarke. “We are very excited to support a concept plan which is achievable within the next five years and would add vibrancy to the heart of the City. A revitalized downtown waterfront will transform the area; bringing in new residents to the downtown, creating jobs, boosting tourism and increasing the City’s tax base.” Fifty-five townhouses, 17 single-detached homes, and over 54,000 square feet of condos expected in this project. Twelve new commercial business spaces also being proposed in this concept. City staff will now pour over the design and report back to council in early 2018.