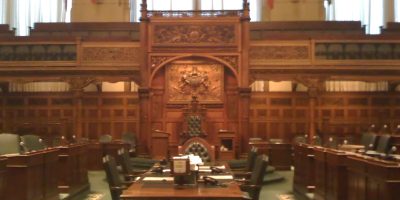 A wild day at Queen’s Park, that started with some being taken out of the gallery in handcuffs and ended with a historic vote on one of Canada’s most controversial laws.

Protesters made their presence known at the Ontario Legislature this morning, as MPPs sat to table the Notwithstanding Clause. The speaker of the house demanded the gallery be cleared following jeers and shouts of “shame” and “bully” from onlookers, directed towards Premier Ford as he left the legislature floor.

The tabling of the bill in the afternoon was halted briefly as NDP MPPs held a protest on the legislature floor, banging on their desks until being forced out. Opposition Leader Andrea Horwath was the first New Democrat escorted out.

The bill was finally introduced under the name Efficient Local Government Act and passed the first of three readings. This would mark the first time in Ontario history the Notwithstanding Clause has been put into use. It still requires Royal Assent before being passed into law.