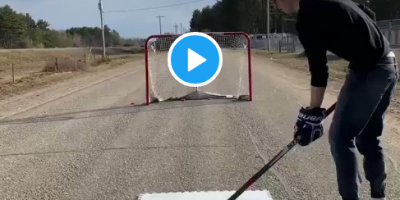 Zac Bell played for the Orillia Terriers and North Central Predators, he’s clearly got hockey skills but these trick shots go beyond just that.

I don’t know any hockey players who can twirl, flip and spin their stick like this.

We asked, you voted. Zac Bell (@alwayshockeyy) is your 2020 #NHLFanChoice Fan of the Year! 👏

The NHL and Sportsnet social media accounts have showcased his work.

He has racked up more than 221,000 followers on Instagram.

His stick handling skill is so next level that he can pull this off with ease.

Zac can also balance the puck anywhere on his stick, not just the blade.

His tricks go inside the house too.

We don’t have a ping pong table at home so had to get creative 😂🧙‍♂️ #hockey #hockeytwitter #hockeyathome pic.twitter.com/KhOH8ijURJ