If at first you don’t succeed…

Orillia Power Distribution Corporation (OPDC) and Hydro One are going back to the Ontario Energy Board hoping to convince the board that transferring ownership of Orillia Power’s distribution arm – basically its poles and wires – is not a bad thing.

The Board has nixed a request from both for an appeal of an April decision suggesting the deal would eventually result in higher rates for customers.

“The City of Orillia as the sole shareholder of OPDC is continuing down the Council-approved path to sell our local distribution company,” said Mayor Steve Clarke. “The OEB has not ruled on a key element of the deal which is a commitment from Hydro One that in year 11, after 10 years of lower distribution rates with Hydro One, Orillia customers will be no worse off than if we had retained OPDC. It is in the best interest of Orillia to pursue every avenue possible to complete a deal that offers $200 to $300 million in near-term economic impact in the community and lower distribution rates for 10-plus years.”

The City of Orillia notes the April 2018 OEB decision to deny the application was based on the OEB’s uncertainty of what distribution rates in Orillia would be after 10 years with Hydro One (in year 2030.) In its decision, the OEB ruled that Hydro One and OPDC had successfully discharged other components of the traditional no harm test.

“If the sale of OPDC to Hydro One is successful, distribution rates (20-25 per cent of the overall electricity bill) would be reduced by 1 per cent and frozen for five years, followed by only inflationary increases for years six through 10. After year 10, Hydro One has committed to distribution rates that will be no higher than the OPDC status quo. Any adjustment rates after year 10 would need to be reviewed and approved by the OEB.”

The City further contends if the sale to Hydro One is not approved, OPDC will be required to file for a distribution rate increase (known as a Cost of Service rate application) with the OEB at least twice over the next 10 year period. It is estimated that distribution rates will increase by an average annual rate of 2-4% over the next 10 year period.

Highlights of the deal:

The Ontario Energy Board decision appears to be final.

There will be no sale of Orillia Power’s distribution arm (poles and wires) to Hydro One.

The Board has nixed a request from both for an appeal of the April decision, saying at the time the deal would eventually result in higher rates for customers.

A public meeting Thursday night in Orillia gave the public a chance to weigh-in on the City’s sale of Orillia Power’s distribution arm to Hydro One.

Orillia Council gave the public a chance to weigh-in on their deal with Hydro One #Orillia #Hydro #HydroOne #onpoli https://t.co/7Flc1OI12r https://t.co/gKaeM0tydC

The sale is dubbed a “poles and wires” sale to avoid confusion, meaning the town isn’t selling Orillia Power, just its distribution. The public was told the difference to service during outages will be the colour of the truck, that’s it.

The public forum comes after the Ontario Energy Board rejected the $26 million dollar sale to Hydro One. Since that ruling Orillia filed a motion asking the OEB to review and revise the ruling.

OEB Reject Deal With Hydro One

In its 23-page decision, released on April 12th, OEB said the deal would have meant higher rates for customers after year 10.

In the deal, any increase in year 6 through 10 would be kept to the rate of inflation – with the first 5 years seeing a 1 per cent drop in distribution charges. Around 20 per cent of electricity bills in Orillia are tied to distribution.

“We Own It” group speaks out against Hydro One deal

The hundred or so in attendance had mixed opinions on the deal. Young father and local business owner Josh Morgan, who is an urban planner in Orillia, says its an opportunity worth taking a risk on and the good outweighs the bad.

Sandra Cadeau and the “We Own It” group say we need to hold onto our public assets. They believe Hydro One are just dangling a carrot in front of Orillia taxpayers with the promise of more jobs.

Others suggested the city owed it to future generations to make this deal happen while some pondered what happens next if the appeal of the OEB ruling fails?

Talks for the deal first got underway back September of 2015. A year later Hydro One had agreed to acquire OPDC for $26.35 million and its nearly $15 million of debt and regulatory liabilities, for a total of $41.3 million 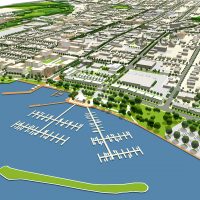