Ray Tomlinson, inventor of the contemporary email system, has died of an apparent heart attack at the age 74. His passing was confirmed by Mike Doble, director of corporate PR at Tomlinson’s employer Raytheon. In a statement to CNET Doble described Tomlinson as a “true technology pioneer”.

Back in 1971, while working for Boston-based tech firm BBN, Tomlinson developed a system for sending electronic messages between computers on different host networks. Tomlinson was working on ARPANET, a precursor to the modern internet. While it seems strange in the modern networked world, previous messaging systems allowed you to share messages for other users on the same computer.

Perhaps more famously, it was Tomlinson’s system that introduced the “@” symbol into email lexicon. Speaking to CNET back in 2002, Tomlinson said he had just been looking for a way “of separating the user and the computer name”.

“In English the @ sign is obvious, in other languages it isn’t,” he said. “But being the only preposition on the English keyboard, it just made sense.”

Tomlinson received recognition and acclaim for his work, including being inducted into the Internet Hall of Fame in 2014. In 2011 he was ranked fourth on the list of the 150 most significant innovators to attend the Massachusetts Institute of Technology (MIT).

Tomlinson himself remarked that, at the time, his invention had seemed useful, but not particularly significant, “It was actually not until about [1995] that someone asked me the question about what I’d really done back then, and in thinking about it, it occurred to me that I was the first one to send an e-mail. A lot of other things had happened to e-mail in the interim. Apart from being the first e-mail, it hadn’t seemed so noteworthy.”

Email, of course, went on to dominate the world’s electronic communication, remaining a significant player even against the rising tide of SMS and countless instant messaging programs. 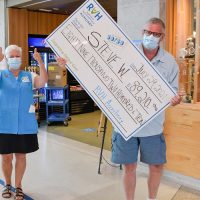