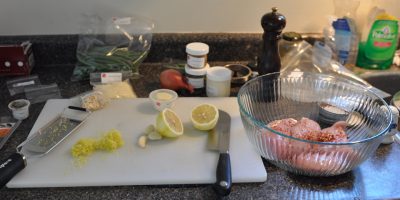 I’ve been hearing and seeing ads for meal prep kits for a while now. If you’re not familiar with meal prep kits, you get all the ingredients you need for 2 to 4 meals a week. Everything is pre-portioned and they arrive in insulated boxes, to your doorstep.

After hearing an ad for 50% off HelloFresh on a podcast, I decided to give it a go. 3 meals for 2 people, for about $40- that was worth it. I wish I had thought to take photos of the HelloFresh box but I did not.

When I told my husband what I had done, he was incredulous. He thought it was a silly idea and way over priced (remember, $40 was half price). He even said he was not going to be the one to make the meals- not because he doesn’t cook, he’s a great cook, but because was against this “Silly Idea”

And then, he ended up making one of the meals and sheepishly called me to apologize. It was so convenient to have everything pre-portioned that he actually called the company and asked if one could sign up for once a month instead of every week. You can!

We decided to try out another company at a discount, Chef’s Plate. We happened to be going to the cottage the day after the box arrived and having 3 meals ready to make at the cottage was a great bonus.

We decided we’d get a box a month as a break from meal prep and as a way to have an easy at-home Date Night.

We haven’t decided yet to stick with one or the other company – they have a few differences, which I will share further down this post.

Here are the photos from our most recent Chef’s Plate delivery: 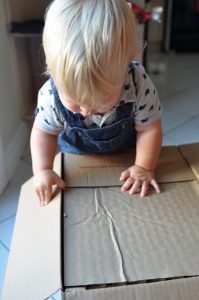 The box arrived on our doorstep on Tuesday and the contents remained cold until we arrived home late that afternoon. 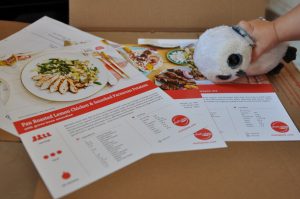 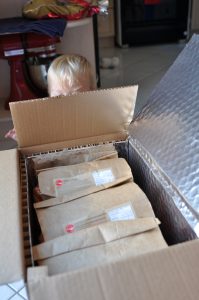 Each meal in its own bag. 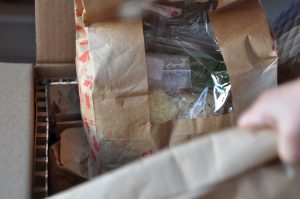 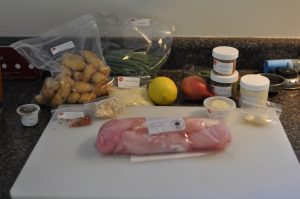 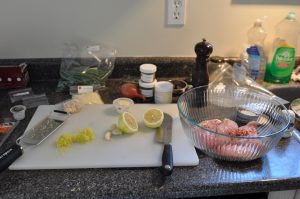 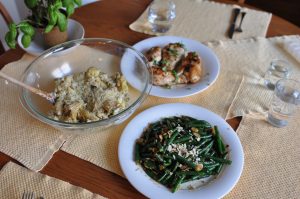 So, are these worth it?

My husband and I are both fairly good cooks and we are pretty good at meal planning and shopping for said meals. And, we don’t eat out a lot. So, for us, something like this is a luxury. The amount of food you get is NOT worth over $100 for 3 meals for 4 people. You can plan and cook for much less per person. If you do eat out a lot and if you want to learn how to cook a bit better, these could be great for you.

But, what we find is that the meals are very convenient. AND, they also introduce us to new flavour combinations and ways of making things we would not have thought of. It gets us out of our rut.

For instance, the HelloFresh box had a recipe for glass noodles (mung bean noodles) with beef, carrots and beans. It used fish sauce and lime which I would have never thought to use (we actually have fish sauce in our fridge that we hardly ever use!) After making that recipe, I’ve made it twice since. It’s one of my favourites!

This week, with Chef’s Plate, the smashed potato salad was my favourite. It was sooooo easy and used simple ingredients to make a delicious potato salad. I’ll be doing that again! And, I would have never thought to put lemon zest on my green beans.

I’d encourage you to try a trial box of whatever company you can find.

*NOTE: this post is from 2017 and some of the features mentioned below may have changed.**

I like the packaging of HelloFresh better. I wish I had taken pictures. Every meal was in a little box that stacked easily in the fridge and was easily recycled. UPDATE: They’ve since switched to paper bags, but they have no plastic window so they’re easily compostable.

Both have nice recipe cards but I like that HelloFresh has theirs in metric. Chef’s Plate, while a Canadian company (Hello Fresh originated in Germany) has most of the ingredients in ounces/imperial. And frankly, I’m trying to rid my brain of imperial and only use the metric system. It’s 28g, not 1oz! I may be one of the very few people who cares about that!

In our first box with Chef’s Plate, we had double of one recipe and none of the other. A call to customer service, which was easy and quick, solved the problem with the recipe being sent to my email address.

Hello Fresh has three different meal types: the Pronto which is “full of exciting flavours” and that’s where the beef noodle recipe came from, the Family Plan, which is less adventurous, and the Veggie Plan. The Pronto plan for 4 is more expensive than the Family Plan for 4.

Chef’s Plate has the choice of 2 or 4 person plans and you get to choose from 4 meals each delivery.  Chef’s Plate meals are comparable in selection to the Family Plan with HelloFresh.

Last night’s meal with Chef’s Plate was estimated to take 45 minutes. It took me 55 minutes (yes, I timed it). The other recipes in the box are supposed to be ready in 20 minutes and 30 minutes.

You can suspend your account with HelloFresh and easily reactivate it, then skip deliveries weeks in advance, if you so please. With Chef’s Plate, you put your account in a sort of sleep mode and order boxes only when you want to as opposed to automatic deliveries.

HelloFresh has an ice pack recycling program: Collect a certain amount of them then you can send them back at no cost.

Have you tried these kits? What did you think?