20 years ago, I was in Grade 6 and basically oblivious to the state of popular music. I had spent most of my childhood listening to my parents’ collection of classical music and also the sound track to Andrew Lloyd Webber’s Joseph and the Amazing Technicolour Dreamcoat. (I can still sing that one through for you!)

But 20 years ago, 3 brothers were writing music and the first version of their very first hit single was recorded. It wasn’t until 1997, that a remixed version of “Mmmbop” shot the three young boys to superstardom. 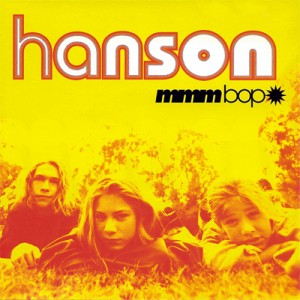 I remember the black and white photo of them in Seventeen Magazine and the story that went along with it. I had no idea who they were nor had I even heard the song that everyone was going on about. My second oldest brother had been in Holland around the time Hanson shot to stardom and he came back with tales of the ubiquity of this band “who look like and sound like little girls and go exploring in secret caves in their music video”.  He tried to sing some of the song for me but it was (in hindsight) hilariously inaccurate.

But, then I heard “Mmmbop” and I loved it! One day, on the school bus, the song came on the radio. I had my mother’s tiny reporter’s tape recorder with me and one of the guys held it to the speaker and recorded the song for me. I listened to it over and over; so many times that I had auditory illusions of a tiny band singing the song  in my ear when I wasn’t actually listening to it!

Eventually, I bought the album on tape. I received the CD for my birthday that November though I didn’t have a CD player until I received one that Christmas!

The following Easter, I was in charge of our Easter play at school and managed to include Hanson. It was a multimedia presentation, ei. we had a live stage production with a TV screen for pre-recorded action, and I used “I Will Come to You” as the sound track for the scene with Jesus carrying the cross. I actually put headphones over the video camera’s microphone while we filmed. No editing booth for us in Grade 8!

I wrote the band, once or twice, I had posters of them on my wall (along with Leonardo DiCaprio), I bought all their albums and even bought their concert film Road to Albertain on VHS! They truly were the first band I loved. In fact, they’re the only band that I felt strongly about for many years. Sure, I bought Savage Garden’s debut album; Chumbawamba, and Backstreet Boys’ Millenium were also were part of my collection. But only Hanson made it to my wall.

However, I never saw them in concert in their ‘heyday’.

It wasn’t until November of 2013, 16 years after first hearing Mmmbop,  29 years old, married, mother of one, on Maternity Leave, that I finally saw Taylor, Isaac and Zac perform live. My housemate from University is also a fan and when I floated the idea of going to Montreal to see Hanson, she jumped at the chance. She had also never seen them live. All these years later, I feel like the wait was worth it.

They have become better singers, better musicians and better performers. I can imagine their shows when they were 11, 14 and 16 were not nearly as good – even if they did have a big stadium production team back then.

The show at the small club in Montreal was perfect. The cliché is ‘intimate‘. They sang a variety of their new music as well as song from Middle of Nowhere. When they performed “I Will Come to You”, I got a little choked up. I thought to myself “12 year old Lisa, this is what you’ve been waiting for!”

People still laugh about “Mmmbop”  but every  Hanson fan will tell you, their music only got better and better.

So, cheers to 20 years, to the first band I ever loved.