A 27-year-old Bradford man’s licence was suspended for three days after a roadside breath test resulted in a Warn Range reading. An officer conducting proactive patrol duties Tuesday morning spotted an SUV driving erratically through Bradford Streets. The officer stopped the vehicle at a gas station on Colborne St. An odour of alcohol was detected and a roadside test was conducted which resulted in a Caution. The driver received an automatic three-day licence suspension along with several Highway Traffic Act tickets for failing to signal, proceeding through a red light and failing to surrender a driver’s licence.

A 50-year-old Bradford man is charged with impaired driving after crashing his motorcycle. Police were called to a single motor vehicle collision with an injured person on Canal Rd. near Line 5 in Bradford West Gwillimbury late Saturday night (June 30th). Based on the officer’s observations and an odour of alcohol, the driver was placed under arrest for impaired driving. He was taken to hospital for treatment of minor injuries. Blood alcohol testing resulted in readings of more than twice the legal limit. As a result, the driver was charged with Impaired Care or Control and Over 80. His licence was suspended for 90 days and his motorcycle impounded for seven days. He was released with a future court date.

On Saturday June 30th around 9:00 p.m. a South Simcoe Police Service officer was conducting radar enforcement on the 20th Sideroad near Lormel Gate in Innisfil. The officer observed a vehicle travelling 92 km/h in a posted 60 km/h zone. After stopping the vehicle, the officer noticed an odour of alcohol and issued a demand for a roadside breath test. The test resulted in a fail and the driver was taken to North Division for further testing. Readings of Over 80 were obtained and the 27-year-old Bradford man was charged accordingly. His licence was suspended for 90 days and his vehicle impounded for seven. He was released with a future court date. 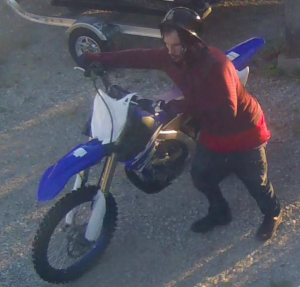 South Simcoe Police Service officers are searching for a dirt bike thief who drove off with the machine after breaking into an Innisfil dealership. Police responded to an alarm at the business on Commerce Park Dr. around 8:30 p.m on Monday, July 2nd. When officers arrived on scene they realized the business had just been broken into and an off-road motorcycle had been stolen. The suspect is described as white, unshaven, wearing a red, long-sleeved shirt with a black hood, black helmet, dark pants and dark shoes. Anyone with information about this break in and theft is asked to call us at 705-426-2141, 905-775-3311 or Crime Stoppers at 1-800-222-8477 (TIPS).