Brett Butt was one of the creators and stars of Corner Gas, a wonderfully quirky comedy set in the fictional town of Dog River, Saskatchewan. I LOVED the show. My father and brothers loved the show. My university house mate was a big fan too. She even visited the town (Rouleau, Sask.) where they shot the show!

If you’re missing his humour, here’s a selection of Brent Butt in 140 characters or less:

The Truth about The Revenant:

Sneaking peeks at iPad of guy beside me on plane & as near as I can tell, 90% of The Revenant is Leo crawling thru various kinds of muck.

The important questions in life that must be answered:

Surely you’ve noticed this too:

Today marks the 10th anniversary of the last time a politician answered a question without using the word “Look,…”

Thoughts on the US election primaries:

Should either of these pissy dinglenuts be in charge of anything? pic.twitter.com/crDv0fxa45 — Brent Butt (@BrentButt) March 23, 2016

The real meaning of ‘crunch time’ :

Getting down to Crunch time!

Yeesh, the weather doesn’t know WHAT it wants to do today or any other day since it’s not a sentient entity. — Brent Butt (@BrentButt) March 15, 2016

Some people use the word “fact” when they clearly mean “thing that was posted online somewhere which aligns with what I already believe”.

His take on an incredible scientific breakthough:

So then I yelled “I got some gravitational waves for ya, Einstein!” and cannonballed into the pool, totally soaking the egghead’s clipboard. — Brent Butt (@BrentButt) February 11, 2016

When ads bum you out:

For me, it’s when I realise I’m singing along to Nickelback … :

Was in the car when TLC’s “Creep” came on the radio and I instinctively started doing shoulder bounces. Didn’t know I had those instincts. — Brent Butt (@BrentButt) February 2, 2016

And, his take on sports fans:

“I’ll tell you EXACTLY what this team should do before #NHLTradeDeadline…” says guy walking into H&R Block cuz he can’t do his own taxes. 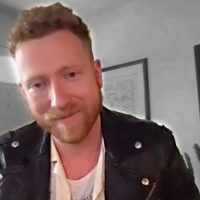