What shows did you grow up watching?
I grew up watching TV shows from my parents’ childhoods. It wasn’t something they forced on us; we simply only got 2 or 3 channels. One was CBC, the other was CKVR and the third was sometimes TVO or sometimes CTV. OK. We only really had TWO channels!
CBC played all the kids shows we love: Mr. Dressup, Fred Penner’s Place, Under the Umbrella Tree.

If I remember correctly, CKVR (now CTV Barrie) was a CBC affiliate in the early and mid-90s. So, beyond local news with Bob McIntyre in Garden (RIP) CKVR played OLD TV shows.
In the summer, I would watch Perry Mason with my three brothers. Perry Mason first aired in 1957, which is before either of my parents were born!
I loved I love Lucy (1951-1957) and Gilligans Island (1964-1967).

When we discovered The Beverly Hillbillies (1962-1971) one day after school, it was magical! “Doggonnit”, “ceeement pond”, and “Eye-ball ya later” also entered our vocabulary.

I’d like to forget that The Three Stooges (1960-1972) ever existed. My little brother took their antics to heart, sometimes.

At some point, CKVR became The New VR and many of the shows I loved no longer played. Instead, we got Breaker High, Student Bodies, The Power Rangers, Xena Warrior Princess and Hercules. (Or maybe those last two played on CBC. I don’t remember, exactly.)

Now, I have a 3 year old daughter and she has it even ‘worse’ than I did.
Well, we don’t have cable or satellite TV and, even with an HD antenna, we can’t really even get CTV-Barrie or any other TV channel.

Truthfully, I don’t really know what the kids shows are these days! Once, my best friend turned on the kids channel while we were at her place. I don’t know what crazy show was playing but I had to turn it off after 3 minutes: the characters were bouncing around the screen talking in some sort of gibberish! Are they trying to wire children’s brains to not focus?

So, for my daughter, “TV” is a treat. And guess what she gets to watch? 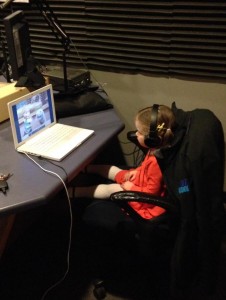 Yup. I bought Mr. Dressup Tickle Trunk Treasures on DVD! It makes me so happy to hear her talk about Casey and Finnegan and watch her break into a smile as something on the screen delights her.

Maybe I’m forcing nostalgia on her but maybe these shows are just timeless and wonderful.

She does watch Thomas and Friends and Angelina Ballerina on Netflix from time to time.

But, I’ve got The Beverly Hillbillies and Gilligan’s Island waiting on DVD, for when she’s a little older!