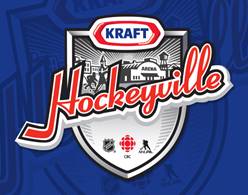 Collingwood, is one of two Ontario towns in the running for this year’s Kraft Hockeyville title. Cobden, near Pembroke, is the other. Eight other towns across Canada made the Top Ten.
Online voting for a winner began Sunday and ends at midnight tonight. The two communities who get the highest number of votes will face-off in a second vote on March 19 and 20. The winner to be announced on or around April 1. The winning town gets to host a NHL pre-season game and $100,000 in arena upgrades.