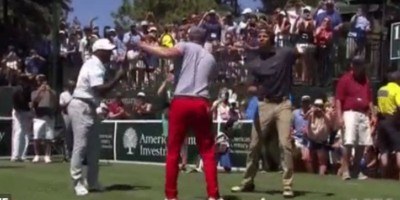 Over the weekend,  Justin Timberlake, Alfonso Ribeiro (aka Carlton from the Fresh Prince of BelAir TV show) and Steph Curry from the Golden State Warriors, took a break from playing in the American Century Celebrity Golf Championship at Lake Tahoe in California, to have a little fun with a slowed down version of ‘The Carlton’….