I’m just going to say it – I love Hanson. You probably figured that out from the title of this article, but I wanted to make it abundantly clear.

My love for the musical band of brothers started way back in 1997.  I had heard MMMBop on the radio, seen the video on Much Music and Hit List on YTV (if you don’t remember seeing music videos on TV you were probably born after 1990 and should stop reading this now) and couldn’t WAIT to get my hands on their debut album.

On May 6th, 1997, Middle of Nowhere was released. I was 12 years old. With the money I had earned babysitting burning a hole in my wallet, I had my Dad drop me off at the mall and I set off to purchase the 2nd CD I had ever bought on my own (the first was Alanis Morisette’s Jagged Little Pill, and I had to hide it from my parents because of the advisory). 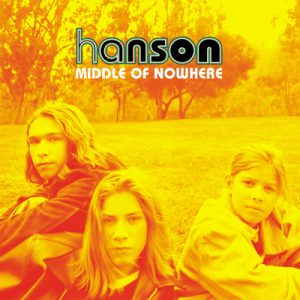 Needless to say, this was the only CD in my Discman (again, if you were born after 1990, just stop reading) that entire summer. I had Hanson posters on my walls.  I bought their Christmas album that fall (I’m Jewish and don’t even celebrate Christmas) and saw them in concert at the Molson Amphitheatre in July of 1998.

I started high school the fall of 1998, and liking boy bands was suddenly considered wildly uncool. That didn’t stop me. I’d defend Hanson to anyone who listened – they play instruments, they write their own songs, they are real. musicians. No amount of negative public opinion could sway my loyalty.

Here’s a funny thing about Hanson – along with the rest of us, they have aged. They have actually aged very well. Exhibit A: This video of them performing an acoustic version of MMMBop last year.

They’ve also continued to put out new music. Really good music (see above where I mention the fact that they’re real musicians). My love for has them never wavered. I’ve purchased every album, and kept a passing interest in their other projects. Did you know they launched a beer? It’s called MMMHops. Hanson is the best.

As we all get older, life gets busy. I myself have 2 kids, so I don’t have a ton of time for band-worshiping these days. But then, something happened.

On Monday, Hanson announced their 25th Anniversary Middle of Everywhere Tour. My excitement level was through the roof (a feeling mirrored by every woman on my Facebook between the ages of 28-35). This is it! What my inner 12 year old self has been dreaming about for 20 years! 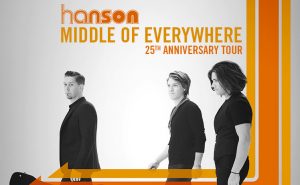 I immediately looked into getting tickets. I discovered that if I joined their fan club, I would be rewarded with a pre-sale code that would allow me to purchase tickets TWO FULL DAYS earlier than regular, non-fan club members. What was a 32-year-old-mother-of-two to do? I mean…the only answer is join the fan club and buy floor seats. Obviously.

I’m leaving out one important detail – it costs $40 to join the Hanson Fan Club. I knew I’d be ruthlessly mocked by my friends and co-workers (at least, the ones with terrible taste in music). But you know what? You only live once. There is no level of teasing that would outweigh the joy I will feel when I’m listening to Isaac, Taylor and Zac sing MMMBop live in Toronto on October 4th.

Who else is going to see them on The Middle Of Everywhere Tour? Comment below!