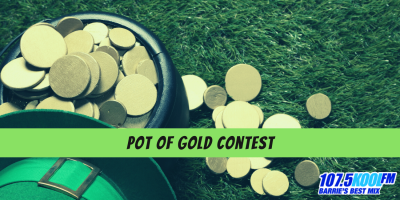 Congratulations to Samuel Chapman of Collingwood, he was the first to correctly identify where Tipsy had hid his pot of gold (underneath the Rainbow Cross walk in downtown Barrie)  and won $1000!

KOOL FM’s Leprechaun has hidden his pot of gold somewhere in Simcoe County and we need your help to find it!  If you can figure out where it is, and be the correct caller through, then you’ll be $1,000 richer!

Listen to KOOL FM this St Patrick’s Day (Wednesday, March 17th, 2021), because every hour between 6 am and 6 pm we’ll reveal a clue as to where it’s hidden!

Put two and two together and the winner could be you!

1. To solve your quest and claim your bounty, open your maps to Simcoe County.

2. My legs are small and the distance is scary, so I never do leave the city of Barrie.

3. I’ve hidden my treasure as well as I can, but luck turns to gold between St. Vincent and Anne.

4. Is it on Bayfield Street? The answer is no, but if you’re Downtown …you’d be getting close

5. Should you feel the breezes of Kempenfelt Bay / Rest assured, treasure hunter, you’re well on your way

6. The Spirit Catcher is very near, You can almost see my gold from here.

7. If you’re on Dunlop street you need to aim lower / And make your way closer to where life moves slower

8. From Toronto to Owen you’re on the right track / If you hit Mulcaster you better turn back.

9. No bridge and no tunnel, but that is no loss /You might see my gold as you’re walking across.

10. Meridian Place to Heritage Park/ This path across Simcoe is anything but dark.

11. It’s not all clovers, and hats and pipes/ Sometimes it’s lucky coloured stipes.

The Pot of Gold Contest is open to any resident of Simcoe County over the age of 18,

KOOL FM will provide one clue every hour between 6am-6pm on Wednesday, March 17th, 2021.

After the clue is provided the phone lines 705-727-1075, will open up and the first 3 callers will be allowed to make a guess as to where the virtual pot of gold is hidden.

All guesses must be specific, there is only 1 acceptable answer.

If no one guesses the specific location then the guessing is over until the next clue is revealed.

Once the pot of gold has been found the contest is over.

KOOL FM is not responsible for a listener’s inability to reach the stations due to service interruption, technical problems, dropped calls, the failure of telephone or electronic equipment, poor/slow internet connection, or the inability of a listener to contact the KOOL FM for any reason whatsoever.

Decisions of KOOL FM are final and cannot be challenged.