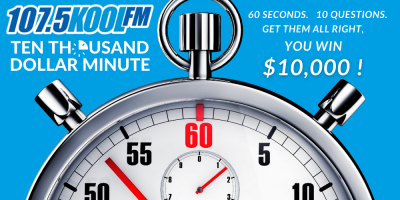 1. A frog goes through five stages of life. When it hatches from an egg, has gills to breathe, and no legs, it is known as a WHAT?

2. Who is the director of the first two Jurassic Park movies?

4. What is the postal abbreviation for Alberta?

5. How many players are on the ice in total during an overtime period in a regular season NHL game?

6. In geometry, how many sides are on a Heptagon?

7. Snap, Crackle and Pop are the cartoon mascots for what breakfast cereal?

8. ‘Botany’ is the scientific study of WHAT?

9. Name the American singer who is married to Chrissy Teigen.

10. In the Jack and the Beanstalk fairy tale, what did Jack trade for 5 magic beans?