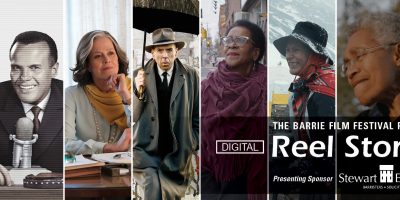 The Barrie Film Festival Offers You a Cinematic Escape with an incredible lineup of Reel Stories!

The 17th edition of the Barrie Film Festival’s Reel Stories will be going online this year and runs March 5-14, 2021. We are thrilled to bring audiences a dynamic slate of films for a ten-day “small screen” adventure! We hope that sharing films by unique and wonderful international storytellers will be a welcomed escape during this time. In addition to the stellar films, the BFF can co-ordinate interviews with some of the talented creators behind the stories.

Camino Skies will be making its Canadian Premiere at our festival. It is the debut feature from Australian/NZ filmmaking team Noel Smyth and Fergus Grady. Shot over 42 days, the film follows six strangers on the Camino de Santiago, a historic 800 km pilgrimage that starts in France, works its way through Spain before arriving in the city of Camino de Santiago. This film made its World Premiere at the 2019 Newport Beach Film Festival and received numerous awards at the Doc Edge Film Festival in New Zealand.

Here’s the full line up of films:

This feature film documentary follows the inspirational journey of six pilgrims from Australia and New Zealand as they set out to conquer the almighty 800 km Camino de Santiago.

Cholitas (Spain) – Winner of over 11 awards including Best Film, Mountain Culture at the Banff Film Festival, 2020. Five Bolivian indigenous women all share the goal of climbing the highest mountain in the Americas, Mount Aconcagua, Argentina. This is their journey.

Robert Davidson saw the first totem pole he carved raised on Haida Gwaii 50 years ago. Now an iconic artist known for his sculpture, painting, printmaking and jewelry, he reflects on his legacy in the realms of both art and Indigenous activism.

Derek DelGaudio’s In & of Itself (USA) – Storyteller and conceptual magician Derek DelGaudio attempts to understand the illusory nature of identity and answer the deceptively simple question ‘Who am I?’.

Keyboard Fantasies: The Beverly Glenn-Copland Story (UK)  – Winner of 3 international awards so far, and made the 2020 Top 20 Audience Favourites, Hot Docs 2020. Born in 1944 in Philadelphia, Glenn Copeland was never afraid of breaking barriers. Moving to Canada at 17, the young vocalist was the only Black student in his classical music class at McGill University, and openly lived as a lesbian in the early 1960s before coming out as a trans man. Living in near isolation in Huntsville, Ontario, Copeland self-released the electronic album Keyboard Fantasies on cassette in 1986 which was reissued three decades later by a Japanese rare-record collector, bringing it to the ears of raving fans.

Mrs. Lowry & Son (UK) – (This film is ONLY SCREENING MAR 12-14) – A portrait of artist L.S. Lowry (Timothy Spall) and the relationship with his mother (Vanessa Redgrave), who tries to dissuade him from pursuing his passion.

My Salinger Year (Canada/Ireland) – In New York City in the late ‘90s, Joanna (Margaret Qualley) is a young aspiring writer who lands a day job at J.D. Salinger’s literary agency. While her eccentric, old-fashioned boss Margaret (Sigourney Weaver) assigns her to answer Salinger’s voluminous fan mail, Joanna struggles to find her own voice. This is based upon Joanna Rakoff’s memoir.

In Stray, a trio of canine outcasts roam the streets of Istanbul. Through their eyes and ears, we are shown an intimate portrait of the life of a city and its people.

There’s No Place Like This Place, Anyplace (Canada) – Winner of the top five Rogers Audience Award at 2020 Hot Docs. There’s No Place Like This Place, Anyplace looks at the transformation of an iconic Toronto block – where the world famous Honest Ed’s store once lived – through the stories of its community members as they reconcile their history with the future, all while facing the biggest housing crisis the country has ever seen.

Go to www.barriefilmfestival.ca for updates on tickets, passes, and full festival listing

Prices include HST. Service fees apply. Please note majority of films are only available in Canada.

“Haida Modern” is only available in Ontario.

Reel Stories is a project of the Barrie Film Festival.

The Barrie Film Festival is a not for profit organization that provides film fans unique experiences through year-round programming. www.barriefilmfestival.ca