We’ve been bombarded by pumpkin spice products the last few weeks, and it’s just not stopping.  Now Bud Light is releasing a pumpkin spice, Hard Seltzer, along with three other fall flavours.

Apple Crisp is supposed to taste like “drinkable” apple pie.  Maple Pear is a combo of pear and maple syrup.  And Toasted Marshmallow tastes like a marshmallow with a hint of chocolate.

They hit stores nationwide on Monday. 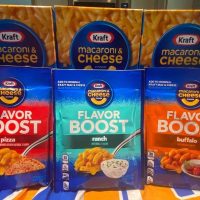