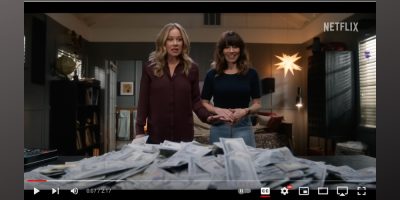 Variety reports that the Married with Children star could barely walk and would take a wheelchair to the set for the final season.

She told the outlet, “We have to finish this story. It’s too important to our hearts; too important to our souls. And we have to give this gift, not only to ourselves — there are people that love these characters, and we’ve got to let them have their closure too.’ So, if that meant me having to take a break in the middle of the day so I could go sleep — or me just leaving because I couldn’t do anymore — then that’s what we had to do.”

The star said that despite her diagnosis, she still wants to keep working.  Applegate explained, “It’s about finding what I’m capable of doing.  I’m so new in this right now.  It takes time to kind of figure out this disease and figure out what’s bringing on symptoms.”

For now, she’s just “enjoying being a mother” and building up her stamina by riding her Peleton.

Christina will also be honoured with a star on the Hollywood Walk of Fame in the Television category.  The ceremony will take place on November 14th, and will be the first time since her diagnosis she will be seen in public.

The final season of ‘Dead to Me’ starts streaming on Netflix on November 17th.