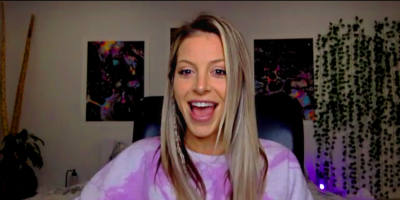 “I feel like so seldom these days do I go back to the beginning,” she says when I ask Delaney Jane about how writing songs and music entered her world. While I know her career started as a topliner for EDM artists (writing the melody over the beat), I want to know about the very start. “It started when I first started learning how to write and I was writing poetry” she tells me. “Really funny little quirky things. I know my mom has collected some!” Writing was a constant companion for her. “There was a lot of turmoil at many points of my childhood” she says, “so writing became my cathartic release. It was my way of expressing myself when I didn’t know how else to express myself.”

“I’ll never forget the first day I was able to actually play through a whole song on my guitar and sing it all the way through.  It changed my life.”

It wasn’t until she was 13 when music entered her life in a tangible way. Her mother rented her brother an electric guitar and an amp and, when he was gone one day, Delaney snuck into his room and started playing. Her mother heard and poked her head in and, instead of getting her in trouble, asked Delaney if she wanted guitar lessons. “The next thing I know she bought me an acoustic guitar, put me in singing lessons and guitar lessons and finally, I had been putting my poetry to music. It opened so many doors for me. I’ll never forget the first day I was able to actually play through a whole song on my guitar and sing it all the way through.  It changed my life.”

From there she dove deeper into music, joining every choir she could in high school, and then she applied to and was accepted to a private post-secondary school for performing arts in Toronto.  It was at the school where she met Shaun Frank, with whom she has collaborated on pretty much all of her music.

The first big break was a song she and Shaun Frank wrote called “In My Hands” that was picked up by Lush & Simon. She was at school, during one of the usual “super intense” 12-hour days of study, when Shaun called her and told her that the song was signed to Spinnin’ Records.

“At the time I was just like ‘ok, what’s Spinnin’ records?’ I was just so fresh in the industry that I didn’t know anything about anything,” she says.  “But it was that first moment of ‘Wow. Ok. The biggest dance label in the world has just signed one of my songs.” That was a pivotal moment for Delaney Jane because it led to many collaborations that then led to her solo career.

Writing During the Most Difficult and Trying Year of Her Life

Delaney Jane moved from Toronto to LA last February.  The 4th, to be exact. Just before the chaos of the global pandemic began.

“I couldn’t live in the concrete cage any more!” she tells me.“I’m not a big city girl. I’m not. I just can’t do it.” But, isn’t LA a big city? I ask.  “The only part of LA that feels like a big city is downtown LA and it feels like Toronto,” she says. “The rest of it’s so spread out you don’t look up and see skyscrapers- you can always see the sun. I remember driving in Toronto and I’d get such bad anxiety because the feel in the big city is that everyone is always in a rush… Here, everyone’s just leisurely.”

Delaney Jane had been living back and forth between the cities for many years, doing writing sessions “and escaping winters” so when she made her move, it wasn’t an entirely new environment. But, moving is always stressful, especially when it’s followed by pandemic restrictions. Add to the move a breakup and that’s why 2020 was one of the most difficult and trying years of her life.

“That was the most insane transition of my life because not only was I moving countries, away from my family, away from everything I knew, from the home I built with him… but also leaving my best friend in the whole world.”

Delaney explains, “With me deciding to move to LA, it was also me deciding to end the relationship I was in. For anyone who knows me, Shaun Frank and I ended up dating for the last 3 years of our relationship. That was the most insane transition of my life because not only was I moving countries, away from my family, away from everything I knew, from the home I built with him… but also leaving my best friend in the whole world. There were so many question marks floating around.  Something isn’t right. It’s not that there’s something wrong here but something’s not right. And I had to follow my intuition. And it turns out, everything does happen for a reason and it was meant to be the way it is now. “

Song writing, in those moments, she says, brought her back to when she was a kid “writing my thoughts and feelings just to get through. It’ll always be my go-to therapy, form of expression.”

Through tears cried on her piano, she was trying to be creative but all she could write was heartbroken poetry. Really beautiful poetry.  “Some of, probably, my best songs have come out of it,” she says. One in particular, that she says is her absolute favourite on this upcoming album, is the story of Delaney and Shaun called “Lovesick Lullaby”. “The crazy thing about it is that we wrote it together,” she explains. “It’s such a beautiful ode to our friendship and unconditional love as creators and friends. It’ll rip your heart apart and pull it back together … in the best way possible!”

All she could write was heartbroken poetry

There was a lot of heartache, tears, uncertainties, doubts and fears, to be sure. But, now she’s in a place she knew she wanted to be in her life: she’s sure of where she is, who she is and who she’s with.

SongWriters Camp and “Just as Much”

Songwriters Camp is like summer camp but for adult musicians. “Songwriting Camps are usually the best weeks of my life. I love them!” Delaney tells me.  And it’s pretty exclusive. You can’t just sign up or apply to attend. You have to know someone, be invited, or brought in by your publishing company.  If you’re lucky enough to be invited, you get to fly somewhere lovely, like Delaney Jane did in early 2020, when Camp was in Dubai.

Songwriters Camp is like summer camp but for adult musicians

The days are filled with writing in small groups and, each evening, the groups get together in a living room and perform the songs they’ve written. “The energy at that point in the day is so amazing because everyone’s exhausted, mentally drained but then we get to feed off each other and hear what we’ve made.” This happens for 5 or 6 days with one day off in-between where they usually have a day on a boat. “A day on a yacht!” Delaney smiles, speaking in a mock British accent.

Delaney Jane wrote “Just as Much” at this most recent Songwriters Camp. As soon as she wrote it, she knew she was in love with it and, then, it was about finding the perfect partner with whom to complete it.

She had met Derick Baker, aka Virginia to Vegas, at a SOCAN awards a few years ago and they had talked about doing something together. She sent him the song and he loved it too! Quickly and seamlessly, though completely remotely, they put the song together. She used a lot of the original demo recording from the Camp because there was something about the first take from Dubai, which was recorded on the last day when her voice was a bit raspy. It just seemed right.

“I’m trying to have fun with it and make it into a work of art, just like my music.”

If you just scroll through Delaney Jane’s Instagram account, with all the beautiful photos of her beautiful life in beautiful LA, you’ll miss very honest and raw moments, like when she opens up about her mental health struggles. And then, on Twitter, she writes “just a reminder that social media is fake & the only thing that really matters is your inner peace & how you treat people in this world”. For someone in the music industry, a social media presence is a must and I wondered how she felt about it. “It’s definitely a love/hate relationship,” she says.  “I’m trying more to enjoy it than see it as a numbers game, because I know people can get totally lost in that. I also will catch myself if I’m ever going down the rabbit hole of looking at people’s pages and comparing myself to where I am and where I want to be. It can quickly suck you into a bad place. I’m trying to have fun with it and make it into a work of art, just like my music, and … not take it too seriously.”

About that New album

Her life last year was just making music remotely and much of this year so far has been the same. After releasing her EP Somewhere Else in December of 2020, Delaney Jane is working on the aforementioned new album which might be out this year.  “We are taking our time because, for this body of work, I really want to have everything finished before… all my visual assets, my videos done, everything before we start releasing.”

If not the whole album, look for some new songs from Delaney Jane later this year.

Watch our complete interview above!