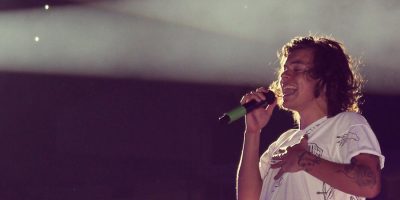 Harry Styles made sure to let his fans know, if you need help coming out, he’s always happy to help.

On Sunday at his sold-out Wembley Stadium concert in London, Styles spotted a sign in the crowd that read: “From Ono to Wembley: Help Me Come Out”.

Harry grabbed the sign saying: “OK, so you would like the people of Wembley to bring you out. OK? All right.”

The As It Was singer grabbed a rainbow flag and explained once the flag was above his head, Mattia (the fan) would officially be out!

It is adorable, check out the video below:

Later on in the show, Harry played a bunch of cuts from Harry’s House, including a cover of What Makes You Beautiful.

Former One Direction member, Niall Horan was spotted in the audience by fans singing and dancing along the entire concert:

The sold-out Harry Styles show at Wembley Stadium had over 90,000 fans in attendance!