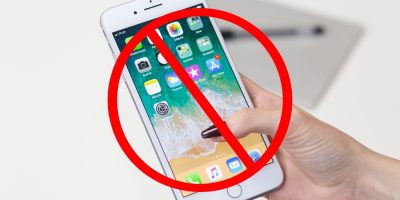 It’s not a traditional high school with over 1000 students, but it’s still worth exploring having heard about what happened when one small boarding school in Williamstown, Massachusetts banned phones.

The small school of just 65 students decided to ban smartphones after months of remote learning due to the pandemic hindering kids’ ability to interact with one another.

The students (just like most around here too) had completely forgotten the basics of face-to-face interaction.

A zombie-like transfixion to screens had been a rising issue for pupils even before the global health crisis, but post-quarantine, it was even worse, the administrator of the small boarding school said. “The students struggled to converse with one another, the ability to be with or sit with other people was completely gone.”

So in the Fall of 2022, the staff decided to ban all smartphones during school hours.

The institution-wide embargo prohibits both students and staffers from having their iPhones and Androids on the school’s campus. It took effect at the beginning of the academic year this past September, and, thus far, it’s been an overwhelming success.

The school says since the ban, the students are thriving, they are happier and are experiencing human interaction like they never have before…

Naturally, there was some blowback from parents who decided to withdraw their kids from school.  But the rest followed the rules and are grateful they did.

Each member of the Buxton community was gifted a Light Phone, a sleek gadget with minimal features made by a Brooklyn company. It can make and receive calls and rudimentary texts but, according to its website, it “will never have social media, clickbait news, email, an internet browser, or any other anxiety-inducing infinite feed.”

Students can also still access social media on desktop computers at the end of the school day if they desire.

The ban has had a positive impact on both academic and social life at the school.