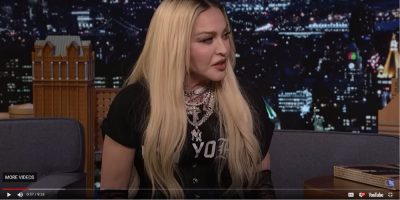 Madonna would like to collaborate with the “brilliant” Kendrick Lamar on a song.
During an appearance on “The Tonight Show Starring Jimmy Fallon” last week, Madonna noted that her new compilation album, Finally Enough Love: 50 Number Ones, features guest appearances from Britney Spears, Justin Timberlake, Nicki Minaj, and Nile Rodgers.
When host Jimmy asked whether there were any artists she would like to work with in the future, Madonna didn’t hesitate to name Kendrick.

“I mean, there’s one artist that I worship more than anything in life and I would love to collaborate with him – that’s Kendrick Lamar,” she smiled.

Finally Enough Love: 50 Number Ones will be released on August 19th.