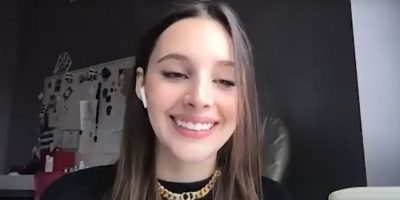 It’s not exactly like a “Hannah Montana” situation, 17 year-old AJA tells me, but the other teens at her school don’t really know what’s going. “And, I kind of think it’s cool like that,” she says, “but my closest friends, they’re really supportive.” What’s going on is that AJA (pronounced ‘Asia’) has her first single to hit Canadian radio, “Red Button”, and it’s doing well.

Music Writing During a Pandemic

AJA has been singing since she was 3 years-old. “I’ve always really loved music and I found that I was a good singer and ever since then I just wanted to do music and I’ve tried to learn the other skills after, ” she says.  “I think that I’m a pretty musical person naturally so it hasn’t been too difficult learning. But growing and learning  from my mistakes has definitely been a long, long time of learning and failing and trying again.”

This past year, AJA feels she’s grown a lot as a writer. That’s because when virtual school ends at 3pm, she can be on a Zoom writing session at 3:05pm and that means a lot more writing sessions than she’s been able to do in the past. It’s one of the good thing that has come out of this pandemic, everyone being willing to work remotely.

The catchy little tune “Red Button” was born out of a “crazy situation” with a guy last year and she wrote the song via Zoom sessions with Jimmy McGormann, who is based in LA, last summer and early fall.  Even though AJA has a studio that her parents built her in their basement, when it’s an important recording session she goes into a professional studio in Toronto, and that’s where she went to record “Red Button”, with McGorman listening from LA. She eventually did travel to the US and finally met McGorman but only once “Red Button” was finished. It was the first time she had written a song with someone without actually meeting them.

“He’s probably the one person who sits there and hates it that it’s doing so well! I don’t mind!”

What does subject of the song think about it? They’re not friends anymore but he does know about the song. “He’s probably the one person who sits there and hates it that it’s doing so well!” she says.  “I don’t mind!” For AJA, seeing the song do well on radio is proof of her hard work. “The entire experience has just been so positive,” she says. “I’ve been making music for such a long time… this is a good time for one of my songs to do well. I’ve finally put so much work into all of it. And I’ve learned so much, especially from ‘Red Button.'”

In the near future, AJA hopes to go tour. It’s something she did when she was 13, supporting 4th Ave and Alex Aiono, and she loved it. It was not the average tour because, well, she was 13 and her mom was with her the whole time “Even now, my mom would be coming with me,” she says. “She’s been my biggest supporter, so she’ll always be there.”

AJA’s favourite thing about touring is not necessarily the performing, though she loves that. It’s meeting the people after the shows. “The biggest part is after your show ….[talking] to the people who were in the audience watching me,” she tells me. “I think the best experience and the most I’ve ever learned from a tour is […] the gratitude that I get back for doing what I do and learning so much about how my music can affect other people. Making music isn’t necessarily only for me but for everyone else.” And, there are people she’d like to meet! “I haven’t met any of the new people that have been  listening to my music!” This, a consequence of releasing new music in the middle of a pandemic!

“Just getting the freedom to get in the car by myself and just drive and blast music: Best Thing Ever!”

Besides releasing a song to radio, the other big thing that has happened this year is that AJA got her driver’s license. “So that takes up all of my free time besides sleeping and eating because I’ve wanted to drive for so long!” The pandemic lockdowns delayed when she was able to go for her G1 exit test but, “Finally in that small window, I took my test and I got it! I’ve had so much fun and freedom!” Not really having anywhere to go and not being allowed to have anyone in the car doesn’t dampen the fun.  Sometimes, AJA will do her makeup and put on a nice outfit just to go for a drive maybe stopping at a friend’s house and rolling down the window to say “Hey, what’s up!”

“Just getting the freedom to get in the car by myself and just drive and blast music: Best Thing Ever!”

Watch our complete interview above!