A new study has found men who pose with dogs in their dating app photos are more likely to be looking for a long-term relationship.

Researchers analyzed 750 dating profiles from both men and women, asking the respondents if they were looking for long-term relationships or short-term flings.

For men who were searching for something serious, an average of 8 in 10 had a dating app photo featuring a dog. In comparison, only 5 out of every 10 men looking for a fling were seen posing with a pup.

Researchers believe that the puppy pics subconsciously signal to single women that a man is trustworthy and responsible.

However, be warned ladies, in many cases, men borrow puppies that aren’t their own for the photograph — deceiving their dates into believing they’re dog dads.

Indeed, surveys have shown women are more likely to swipe on a man’s profile if he has a photo with a four-legged friend.

Sixty-three percent of respondents to a 2002 survey for a pet food brand “I and love and you” said having a cute pooch on their profile helped them get a match online. 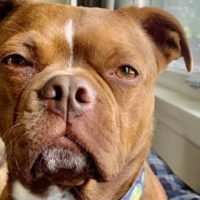