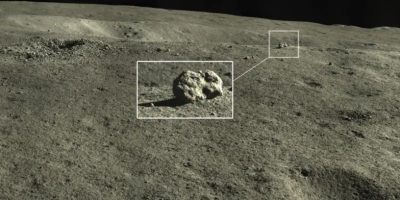 Remember when China’s lunar rover spotted what looked like a hut on the moon? In early December 2021, Yutu 2 spotted something the space agency dubbed  “神秘小屋” (“mystery house”) or a “hut”. Obviously, they did not think it was a hut in the tradition sense of being built by something/someone. It just had that particular shape. 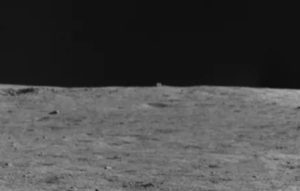 Well, the rover made the 80 meter journey to this hut and discovered that the ‘mysterious house’ was nothing more than a rock. Well, we knew that! But what was surprising was the size of the rock.

Distance and Scale on the Moon

It had been speculated that the ‘hut’ could be a rock the size of the Arc De Triomphe in France which is 50m tall,  45m wide and 22m thick. In December, journalist Andrew Jones tweeted “This thing had been compared to/joked to be the CCTV pants building, the Arc de Triomphe, a McDonald’s and many more. But with no points of reference and no atmosphere on the Moon, it’s very difficult to get any sense of distance or scale (that goes for astronauts too).”

Well, the ‘hut’ turns out to be a small rock on the rim of a crater. The China National Space Administration describes it as looking like a “jade rabbit” holding carrots.

Here’s the rock. What do you think it looks like? 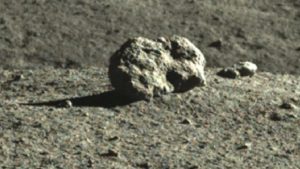 Oh, this is amazing. Close to tears. Ourspace has published an update on the “mystery hut” and it’s so underwhelming it’s brilliant. It’s just a small rock on a crater rim that they’re now calling “jade rabbit” for its appearance. Source: https://t.co/frrMKH7RWM https://t.co/GFCIRzqmDu pic.twitter.com/jpDLDS8TZu