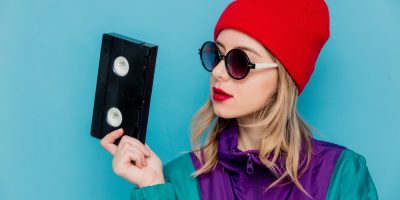 Be kind, rewind!  An entirely new generation of kids will learn what that means when this new comedy series comes to the streaming giant. (who was the main reason for Blockbuster’s demise)

Netflix on Friday announced that Blockbuster — a new workplace comedy set at the last Blockbuster Video store in America — will drop all 10 episodes on Thursday, Nov. 3.

According to the official logline, Randall Park (Fresh Off the Boat) and Melissa Fumero (Brooklyn Nine-Nine) star in the single-camera sitcom that “explores what it takes — and, more specifically, who it takes — for a small business to succeed against all odds.

The series, which was created by fellow Brooklyn Nine-Nine vet Vanessa Ramos, also stars Tyler Alvarez (Never Have I Ever) as Carlos Herrera, Madeleine Arthur (To All The Boys I’ve Loved Before) as Hannah Hadman, Olga Merediz (In the Heights) as Connie Serrano, JB Smoove (Curb Your Enthusiasm) as Percy Scott and Kamaia Fairburn (Holly Hobbie) as Kayla Scott.