Are you still satisfied with your marriage?

“But maintaining a high level of satisfaction in a relationship for an extended amount of time is difficult,” says the study’s lead author and University of Arkansas psychology professor Anastasia Makhanova.

The study found that some people might have a genetic predisposition to feel more grateful for their partner than others. Some people feel grateful, and are more trusting than others, but why?

Researches analyzed 142 newlyweds, or 71 couples, during the first three years of marriage.  They found that individuals with a “CC variation” to the CD38 gene — which has been linked to positive behaviours and perceptions in romantic relationships — enjoyed higher levels of marital satisfaction than men and women with an “AC” or “AA” variation of the gene.

After three years of marriage, all participants felt less happy than when they were first married, but those with the CC gene reported higher levels of gratitude, trust, forgiveness, and overall marriage satisfaction than others with the AC or AA gene.

Just because you have the AC or AA gene, doesn’t mean you’ll end up in divorce, it just means you’ll have to work a little harder in your marriage! 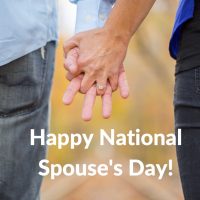