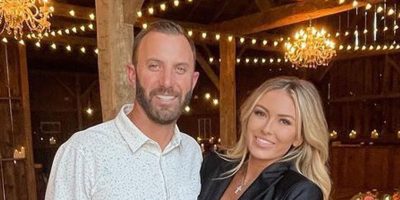 This could go down as the longest engagement ever!  But the hockey heiress and lord of the links finally got hitched in Tennessee over the weekend.

The couple were joined by their family and friends at the posh Blackberry Farm with Paulina wearing a Vera Wang dress.

According to reports, the couple has been celebrating with family and friends before the weekend with a bachelorette party in Palm Beach and a lavish bash in exclusive St. Barts in the Caribbean.

Kid Rock performed at their wedding as Paulina and Johnson have been friends with the singer for years.

Johnson is currently the ninth-ranked golfer in the world and is worth an estimated $50 million and Paulina is the daughter of the Great One, Wayne Gretzky!

Paulina added on Facebook that she had “No Regretzkys”