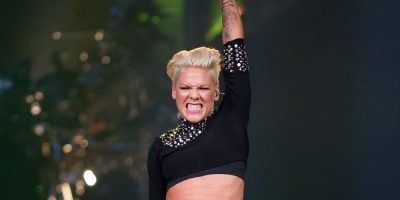 Pink’s new track, “Irrelevant,” is a protest song for the times.

Pink teased the new track last week, writing “Woke up. Got heated. Wrote song. Coming soon.” On Monday, the music video for the “Irrelevant” dropped – a four-minute indictment against some of the most pressing issues facing the country.
The video features footage pertaining to everything from reproductive and LGTBQ rights to racism, while Pink sings in the bridge: “Girls just wanna have rights / So, why do we have to fight?”

The song comes just weeks after she admonished fans of her music that may hold certain right-wing ideals in a post that drew praise and criticism alike.

“Let’s be clear: if you believe the government belongs in a woman’s uterus, a gay persons business or marriage, or that racism is okay- THEN PLEASE IN THE NAME OF YOUR LORD NEVER F**KING LISTEN TO MY MUSIC AGAIN,” she wrote on June 25, the day after Roe v. Wade was overturned.

Pink is not the only musician to speak out following the Supreme Court’s controversial decision. Indie rock star Phoebe Bridgers led a “F**k the Supreme Court” chant during her show at the Glastonbury Festival.

“Fk that sh*t, fk America,” Bridgers said at the time. “Like all these irrelevant motherfkers trying to tell us what to do with our fking bodies.”

Rap-rock group Rage Against the Machine – at their first concert in over a decade – also took a stand against the decision. While the band played, a giant screen behind them cited statistics against forced birth, ending on a slide reading simply: “ABORT THE SUPREME COURT.”