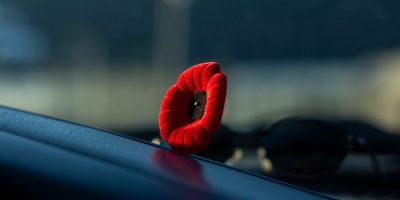 The Poppy has an important history and is symbol of remembrance in Canada and around the world. The red poppy in particular has been used to commemorate soldiers who have died in conflict since the First World War.

Poppies became widely associated with the First World War after the poem “In Flanders Fields.” The poem was written by Canadian doctor Lieutenant-Colonel John McCrae in 1915.

In Flanders fields the poppies blow
Between the crosses, row on row,
That mark our place; and in the sky
The larks, still bravely singing, fly
Scarce heard amid the guns below.

We are the Dead. Short days ago
We lived, felt dawn, saw sunset glow,
Loved and were loved, and now we lie,
In Flanders fields.

Take up our quarrel with the foe:
To you from failing hands we throw
The torch; be yours to hold it high.
If ye break faith with us who die
We shall not sleep, though poppies grow
In Flanders fields.

The poppies grew on the debris covered fields as a result of the lime rubble that fertilized the flowers. They grew all over Europe but were especially prolific in France and Belgium. Once the lime had been absorbed, the poppies began to vanish.

RELATED: Why I teach my son about remembrance day …

The Poppy Becomes A Symbol Of Remembrance Across The Globe

In 1918, 2 days before the end of the war, a woman named Moina Michael made a personal pledge to wear a red poppy as a sign of remembrance after reading the poem.

Inspired by Moina, Anna Guerin attended an American Legion convention in 1920. There she suggested that artificial poppies be made and sold to raise funds for those in need. The money would go to orphaned children and others who had suffered from the war.

By April 1921, the silk poppies had arrived in the US for sale.

Later in 1921, Anna (now known as The Poppy Lady from France) visited Canada. She came to speak with the Great War Veterans Association of Canada (GWVA) in what is now Thunder Bay. She convinced them to adopt the poppy as a symbol of remembrance on July 5th, 2021.

Four years later, in 1925, the GWVA became the Canadian Legion of the British Empire Service League. In 1960 they changed their name to the Royal Canadian Legion.

Today, the annual Poppy Campaign raises funds for Veterans and their dependents. The campaign begins on the last Friday in October and ends on November 11 every year.

During this time people wear a poppy on their left lapel and as close to the heart as possible. Following Remembrance Day ceremonies, many place their poppy on a wreath or at the base of a memorial or cenotaph.

The poppy is sometimes worn at other times of the year. This include:

When event organizers are unsure about whether the poppy should be worn, they reach out to the Royal Canadian Legion who organizes the annual Poppy Campaign.

No matter the time of year, the history of the poppy in Canada is one that is deeply rooted in remembrance and honour.