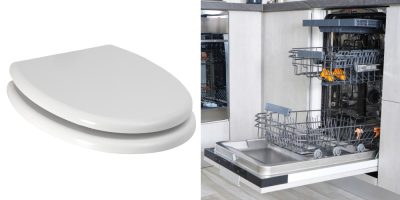 A new “cleaning hack” video that has racked up 3.5 million views on Instagram has left social media critics calling it a “sick trick!”

The clip, which has racked up 3.5 million views on Instagram, features an unidentifiable woman removing a toilet seat to wash it in the dishwasher along with drinking cups, food bowls and other eating utensils.

The viral clip has over 10,000 comments from people all completely gross-out by the hack!

However, despite the stomach-churning thought of co-mingling the germs from a pooper-topper with a dinner plate, in 2016, microbiologist David Coil from the University of California at Davis found that a spoonful of dirt consists of “more bacteria” than a toilet seat.

And Australia-based leading consumer advocacy group, Choice, conducted a 2021 study on items that should and should not be scrubbed in the dishwasher  — including computer keyboards, Lego pieces, fish and, of course, toilet seats.

While most normal people don’t advise this practice, some analysts advise if you must- make sure there isn’t another else in there!