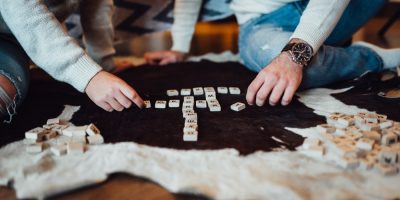 To win at Scrabble, you need to know many words, including some that no one can define.

And now there are even more.  The official Scrabble dictionary has just added around 500 new words, joining more than 100,000 two- to eight-letter terms that are already legal.

They haven’t released all 500, but some of them include BAE, VAX, HYGGE, ZONKEY, VAQUITA, EMBIGGEN, and DUMPSTER.  (???)

It doesn’t really matter what they mean, but if you’re curious:

“Hygge” is the Danish obsession with getting cozy.

“Zonkey” is “a hybrid between a zebra and a donkey.”

“Vaquita” is “a small porpoise.”

“Embiggen” is “to enlarge.”  Yes, seriously.

“Dumpster” is a large container for trash, as we all know.

If you’re a big Scrabble nut, you may know that you used to be able to challenge people for using dumpster, because it’s a word that started out as a trademark so it would require a CAPITAL D.  Now that loophole has been closed.

Other trademarked words, like Xerox and Google, are playable as verbs.

All these new words, and hundreds more, are in the new, seventh edition of the Scrabble dictionary, which is on sale now.  (It looks like the official online dictionary has NOT been updated yet.)