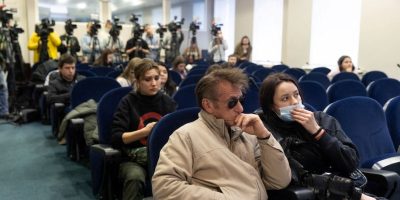 Filmmaker and actor Sean Penn is in Ukraine, as the country deals with a full-scale invasion of Russian military forces. The country’s presidential office said Thursday that Penn had arrived in the capital, Kyiv, to film a documentary about the conflict.

The Office of the President wrote in a Facebook post on Thursday that Penn attended press briefings, met with Deputy Prime Minister Iryna Vereshchuk and spoke to journalists and military personnel about the Russian invasion. Photos have also surfaced of Penn’s meeting with Ukrainian President Volodymyr Zelensky.

Related: Russia-Ukraine: What To Know…

The president’s office wrote on Facebook: “Sean Penn demonstrates the courage that many others, especially western politicians lack. The director specially came to Kiev to record all the events that are currently happening in Ukraine and to tell the world the truth about Russia’s invasion of our country.”

The 61-year-old actor is working on the project in collaboration with VICE Studios. Reports say that Penn flew to Kyiv earlier in the week and that he had previously travelled to Ukraine in November. During that trip, Penn also met with Russia-backed separatists.