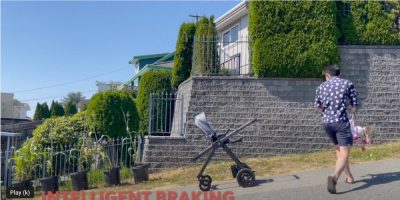 A Canadian start-up called Glüxkind just won an award for their “A.I. powered smart stroller” at the Consumer Electronics Show in Vegas this week.

You won’t see unattended strollers flying down the sidewalk just yet though.  The self-driving feature only works when your kid ISN’T in the stroller.  The inventors say some parents HAVE asked for that feature though.

The self-driving thing is just for when your kid wants to walk or be carried.  The stroller follows you around, so you don’t have to push it.  And when your kid IS in it, it won’t move unless you’re touching the handle.

Some other features do work when your kid’s in it though.  There’s a power assist for going up hills and over grass, automatic braking, so it can’t roll away and alerts if cars or bikes are coming.