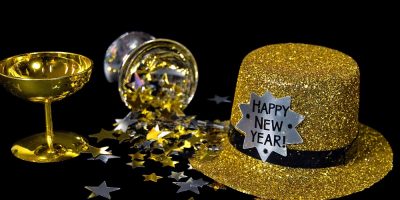 A new survey looked at 2,000 adults’ plans’ for the special night and found the appropriate time to leave: within an hour after midnight, according to half of the respondents.

According to results, nearly a third of people who celebrate New Year’s Eve will host a party this year.

Those who usually host, typically invite about 19 guests – although a third of hosts go a bit overboard with the guest list – and this year, 71% of regular hosts said they plan on inviting more people than usual.

About 30% of people plan on hosting a themed new years party this year!  Besides a good theme, the top party essentials are, of course, food/snacks followed by music and cocktails/drinks.

The survey also found that when it comes to being a good guest at a New Year’s Eve bash, people should bring a bottle of wine or alcohol or a dessert for the host to put out.

Similarly, 48% think it’s rude to stay too late, but another 45% think leaving before midnight is equally unmannerly.

Overall, most people agree that New Year’s Eve is the one night of the year when no one should be alone.

Looking forward, most respondents are optimistic that next year will be better than this year.

WHAT WOULD YOU BRING TO A NEW YEAR’S EVE PARTY?