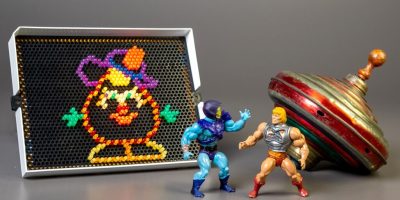 It’s official!  The ancient top, Master of the Universe and Lite-Brite all have a permanent place in the National Toy Hall of Fame; and in our hearts!

There were 12 finalists to choose from, all worthy of a place in the Hall of Fame, but this year Lite-Brite beat out Breyer for the honour.

Here’s a little info about the honourees this year!

About Top: Since ancient times, the spinning top has been a childhood staple of cultures in Asia, Europe, the Americas, and Australia.

About Masters of the Universe: The Master of the Universe line of action figures, which includes the iconic He-Man and She-Ra, traces its popularity to maker Mattel’s use of comic books, television, and the big screen.

About Lite-Brite: Created in 1966, Lite-Brite uses the same concept as stained-glass windows, allowing children to create glowing images against a black background, either following manufactured designs or creating their picture. Through the years, Lite-Brite has gradually changed its format and technology but the potential for open-ended creativity has kept Lite-Brite popular for more than 50 years.