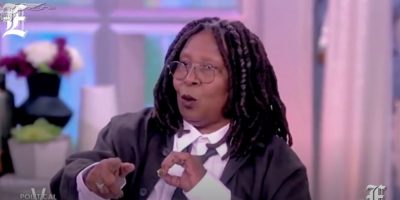 Monday’s episode of ABC’s The View was interrupted by protesters during an interview with Texas Sen. Tex Cruz.  The protesters emerged from the audience shouting over Cruz and the show’s co-hosts, calling out for action on climate change. After one group of protesters was removed from the studio audience, another took their place.

The protests started when Cruz avoided a question about reproductive rights and instead began talking about the economy, at which point shouts and chants of “government funding now!” built up in the audience. Co-host Sunny Hostin explained that the protesters were calling out about climate change, but the second round of protesters made it clear that this was about more than media representation. Co-host Whoopi Goldberg addressed the protestors, saying: “Ladies, let us do our job. We heard what you all have to say but you’ve got to go. You’ve got to let us do our job.”

After some of the protesters were reportedly removed from the studio, Cruz and the panel got their discussion back on track before more shouts overtook them. Those protesters were muted and the broadcast cut abruptly to a commercial break. After returning to the broadcast, order seemed to be restored in the studio, with co-host Anna Navarro telling Cruz: “I’ve been very vocal and critical of you, but I’m sorry that this has happened in our house.”

Following the broadcast, an ABC spokesperson said in a statement: “Three members of the audience interrupted The View today during Sen. Ted Cruz’s appearance protesting about climate. They were promptly escorted out by security.”