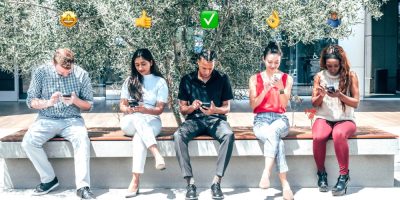 Chef’s Plate surveyed 1,003 Canadians between July 11 and 19, and they revealed Canada’s favourite food emoji of 2022.  The number one emoji is the birthday cake, with 22% of Canadians saying they used it the most.  The second spot goes to the famous eggplant emoji.

According to the survey, men are less likely to use food emojis than women. In fact, almost half of men surveyed said that they never used food emojis, compared to only 35% of women.

The survey data revealed that the birthday cake emoji was the most frequently used food emoji of them all, with 22% of Canadians surveyed saying they use this emoji most often.  The birthday cake is used most frequently by those in the 55+ age group, with almost a quarter of those surveyed in this age bracket saying it is their most used food emoji.

On the other hand, the eggplant emoji is frequently used by Gen Zs, with 24% of 18-24 year olds claiming that this is their most used food emoji.  This could possibly highlight a generational difference in the reason people use emojis; some to convey meaning and others to convey humour and light-hearted insinuations.”

Top 5 Food Emojis Canadians Use The Most:

10 of the Food-Related Emojis Canadians Want to be Released Today:

Top 5 Provinces That Use Food Emojis The Most:

Each year, a list of new emojis is presented for consideration and approval. 2022/23’s new emojis up for approval in September include a shaking face, a plain pink heart, a donkey and the Khanda, the symbol of the Sikh faith