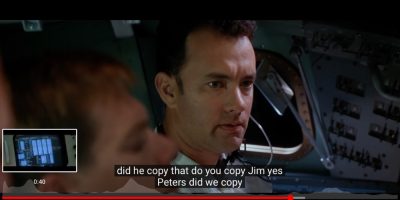 A lot of great quotes come from film and television. But it turns out some of the most famous movie lines have been misquoted for years (some for nearly a century.)

Here are some lines most people have been saying wrong for years.

“Ah Houston, we’ve had a problem.”

Technically this one was misquoted in the movie …

The quote from the movie IS “Ah Houston, we have a problem,” which is how many people say it. But the real life radio communication was “Ah Houston, we’ve had a problem.”

Today, the phrase is used when an unforeseen problem arises.

This one is often misquoted at, “If you build it, they will come.” But the quote actually says “he will come” in reference to Shoeless Joe Jackson, and not “they will come” promising lots of people.

3. Snow White And The Seven Dwarfs

“Magic mirror, on the wall, who is the fairest of them all.”

Chances are, the line you remember is, “Mirror mirror, on the wall, who is the fairest of them all.”

Like Apollo 13, this one is both right and wrong. You see, in the Disney film, the Evil Queen says, “Magic Mirror.” However, the original Brothers Grimm story translates into English as, “Mirror, mirror,” which is what most of us say today.

Humphrey Bogart’s “Play it again, Sam” is one of the most misquoted movie lines of all time. Bogart does say “Play it” in the film, but Ingrid Bergman’s earlier line is actually closer to the misquote.

While talking to Sam, the piano player, she says, “Play it, Sam. Play ‘As Time Goes By’.”

“Oh, no, it wasn’t the airplanes, it was Beauty killed the Beast.”

Most people say “‘Twas Beauty killed the beast.” It isn’t far off the actual quote but a misquote nonetheless. The line has been in every version of King Kong and is usually said at the end of the film.

7. Star Wars: The Empire Strikes Back

Clint Eastwood didn’t actually say “Do you feel lucky, punk?” in Dirty Harry. His actual line was “Do I feel lucky? Well, do ya punk?”

It may be more wordy, but at the end of the day, it gets the same point across.

“Fasten your seat belts, it’s going to be a bumpy night.”

Most people remember this quote as being about a bumpy ride and not a bumpy night.

I guess if your ears were a bit plugged they kind of sound the same. And ride does make more sense when you consider the seat belts.

Either way, the next time things get chaotic, you may want to remember that “it’s going to be a bumpy night”.

“Take your stinking paws off me, you damn dirty ape.”

This one has a few different misquotes. One replaces “Take” with “Get.” Another says “damned” instead of “damn.” And a third makes both errors – “Get your stinking paws off me, you damned dirty ape.”

Regardless of which you may say, in Planet Of The Apes, Charlton Heston actually says, “Take your stinking paws off me, you damn dirty ape.”

RELATED: Adults find it nearly impossible to get through their list of tv shows and movies …