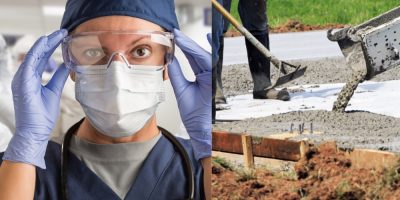 Masks have been everywhere over the past few years, so you’ve probably seen trashed ones lying in the streets.  And as it turns out, that might be the future for them, sort of.

According to reports, billions of masks and rubber gloves are tossed in the garbage each day around the world, but they may have a second purpose.

Researchers in Australia have found that you can shred used PPE, like masks and gloves, add it to cement, and it can increase the strength and elasticity of the cement by up to 22%.  It can also make it more resistant to cracking.

The research is still in the early stages, but if the PPE can become useful in construction, that could make a big dent in the tons and tons of masks and gloves that are piling up in landfills around the world.

It would also be great to find a practical use because masks are difficult to recycle.  Most of them are made of multiple different materials to make them as effective as possible at reducing viral transmission, but that also makes them more complicated to recycle.